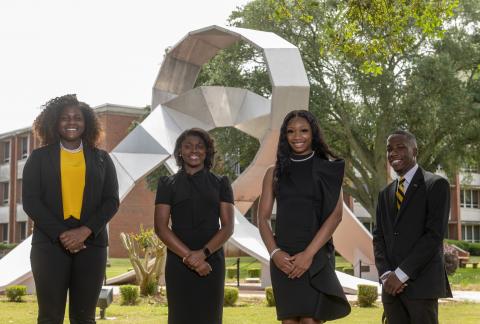 For the second time in its history, Alabama State University’s Student Government Association’s (SGA) senate is part of a pivotal moment – the majority of its executive officers are women.

The new SGA administration is composed of three female students—President Gem Richardson, Vice President Jaylan Brown and Secretary Dy’Oni Charlton, as  well as Treasurer Jeremi Moore.  They assumed their offices on May 1.

When it comes to making history on ASU campus, Richardson has taken a gracious approach.

“It feels great to be a part of this. It’s like a turn of a new century almost for ASU. It feels good to lead a student body as a woman, especially since our student population is majority women.  So, now we actually have a voice and actual representation for us,” Richardson stated.

The Hampton, Georgia native said making changes and giving women a presence was her goal when she ran for SGA President.

“I wanted a leader that looked like me, that I could relate to and that I knew would fight for all students on campus.  Given everything the University has gone through since the pandemic, leading the student body out of the pandemic has it challenges; however, I’m ready for that challenge. My administration and I are very excited to take on the year. We want the student body to get ready for a year of fun, enrichment and growth,” Richardson said.

Richardson, a biology pre-health major, said the first 90 days of her administration will focus on implementing her initiatives by working with all departments on campus.

The 21-year-old Richardson stated that her administration will also create an SGA Web page that will provide students with information on a variety of topics, including listing their current SGA officers, elected and appointed, the initiatives planned for the year, and a list of all the bills and resolutions that are passed by the SGA Senate.

“This page will provide a lot of insight into ASU for those who don’t know much about the University,” Richardson said. “We think all of the initiatives will help enhance the ASU experience for the student body.”

Stepping into a role as a leader is not new for Richardson – she was the SGA President in high school,  was part of an ASU campus leadership organization her freshman year, was a writer for  the Hornet Tribune and was elected to the SGA senate her second year on campus.

“My junior year, I was elected SGA President Pro Tem. Working in all these positions, I had the opportunity to see what students go through, what people who  aren’t like me go through. So, I wanted to tackle student issues more at a higher level,” she said.

Richardson and Brown’s Hornet Pride is on display when they talk about a resolution they wrote in their sophomore year that now benefits the campus’s LBTQ community.

“We had a chance to write the Gender Neutral Restroom Bill, which was implemented in the Student Union.   Once we accomplished that, it was like OK, you guys can be our SGA President and Vice President. Once you can get a Gender Neutral Restroom Bill on campus, you can make serious change,” Richardson said.  “So, that was the marking of what we are going to do and basically one of the reasons that inspired us to run.”

As for Brown,  she said she is very excited about being a part of SGA history because  some women may find it hard to see themselves holding an office when they do not have visible role models.

“Women, in general, receive less encouragement to run. I think it’s time to have more females in these higher positions along with our male counterparts.   I came to the conclusion that both of us were the most qualified people for these positions and we won. Since being elected, we've made an effort to establish more gender parity in student government here," Brown said.

She pointed out that the journey to get where she is now was changeling at times.

“Gem and I started (as members of) the SGA together. And I knew she would be a perfect running mate. We had some challenges, but all of our tears and sleepless nights paid off. I am thankful that the student body trusted, believed, and elected me to serve as SGA vice president,” Brown said. “A few of my initiatives that I plan to carry out once in office is to transform the ‘Hornet Hotline,’ connect incoming senators with returning senators, and establsh a regular senate meeting schedule.”

Brown, a native of Jackson, Mississippi who is majoring in marketing, is a 2018 graduate of Terry High School, where she served as president of the school’s Beta Club.

The 21-year-old currently serves in various roles, from the Financial Secretary for the Beta Pi chapter of Alpha Kappa Alpha Sorority, Inc., to being the President of F.L.Y. Girls, a mentoring program at ASU. She also served in an ASU leadership organization and various positions within the SGA senate from her sophomore year to now.

“Being in my present role, I want to continue to make and create positive change. The campus’s family-oriented environment along with offering a stellar academic program in my major was the deciding factor for me choosing to enroll at Alabama State University,” Brown said.