Vote for Miss ASU to Appear in EBONY Magazine 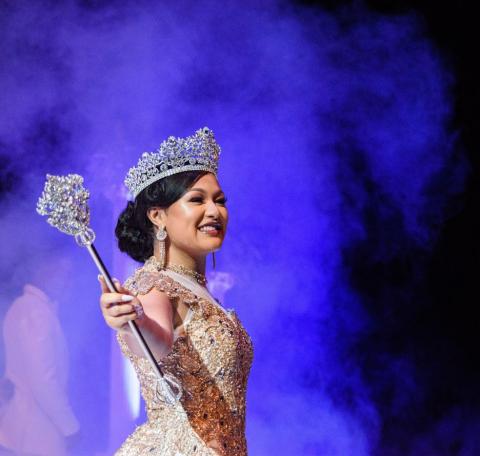 Vote for Miss ASU to Appear in EBONY Magazine

Vote today for Miss ASU Arianna Thompson, to be included in an upcoming edition of “EBONY” magazine.

***
If you’d like to see the reigning Miss Alabama State University featured in “EBONY” magazine, you need to cast your vote.

Arianna Thompson is a contestant in the magazine’s 2018-19 Campus Queens Contest, which is an online competition. The queens who garner the top 10 highest votes will be featured in the 2019 April / May issue of “EBONY.”

A senior graphic design major born in Mobile, Alabama, Thompson is a graduate of Wetumpka High School, where she maintained a 4.1 grade point average and ranked 10th in a class of 272 students. She is an ASU scholarship recipient who has maintained a spot on the Dean’s List each semester since 2015.

Thompson is a student leader who participates in community engagement service projects such as Brantwood Children’s Home Youth Mentorship Program and assisting with numerous summer cheerleading camps. She is a member of the Student Art Organization and a leader with Student Orientation Services where she conducts campus tours and welcomes incoming freshmen and transfer students during orientation. She also was an ASU cheerleader. She believes that her involvement in various student organizations and programs, which involved speaking engagements, social events and developing educational leadership, prepared her to become Miss Alabama State University.

As Miss Alabama State University, Thompson has launched a platform with the theme “P.R.I.D.E.” which stands for Power Revealed in Dedication to Education. Hailing from a family of educators, she will focus on the importance of education not only at Alabama State University, but also in the surrounding communities. Thompson encourages students to embrace new programs such as the Big Hornet Little Hornet Mentoring Program for incoming freshman and transfer students, and the Hornet Community Connection which focuses on tutoring students in the Montgomery Public Schools System.

Thompson loves to help others and make a difference. Her hobbies include spending time with family and friends, designing business logos for clients and cooking. She is excited about the upcoming year as Miss Alabama State University 2018-19 and is driven to help her fellow Hornets and people in the surrounding community.

Thompson plans to pursue an M.B.A. from the University of South Alabama.

She says, “Alabama State University has opened so many doors for me and allowed me to grow into the young woman I am today; now it is my time to leave my legacy and return the favor to O’ Mother Dear!”