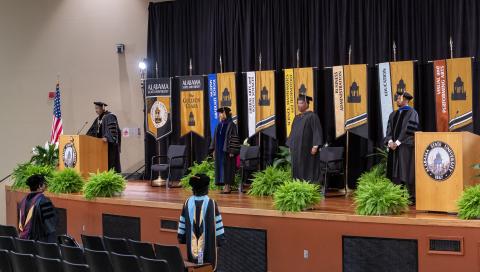 Disclaimer: Alabama State University has issued an apology for the technological problems experienced during the live broadcast. The entire ceremony is being recorded and edited, and will be available on the University’s website (www.alasu.edu/live2020) and on the University’s official Facebook page by noon on Saturday, May 2.

Alabama State University held its first-ever Virtual Commencement ceremony on Friday, May 1 (the original date for the normal spring commencement) to honor its spring 2020 graduates who could not have a formal commencement because of COVID-19 pandemic. The Golden Class of 1970 also was honored.

The online commencement was streamed on several media platforms to mark the graduates’ special day.

The ceremony featured much of the traditional “pomp and circumstance” associated with the familiar on-campus commencement exercises, such as the opening processional, the playing of both the National and Black Anthems, the Posting of Colors and recognizing the commission of Air Force and ROTC officers.

Students, families and anyone tuning in online Friday also heard remarks from President Quinton T. Ross Jr., greetings from Board of Trustee President Darrell Hudson and the commencement speaker. There were solo performances and a performance by the University Choir. The ceremony contained both live and prerecorded elements.

Ross was joined at the virtual ceremony by a handful of University administrators in full academic regalia. Deans of each college, also dressed in full regalia, extended prerecorded well wishes to students in their colleges.

At intervals during the program, Ross read the names of Hornets ASU lost during the current academic year, including the founding dean of the College of Health Sciences, Dr. Denise Chapman; former Hornets football standout, Tarvaris Jackson; and seven students, including Amanda Taylor Smith, who was honored with a posthumous doctoral degree in Educational Leadership, Policy and Law, and a posthumous degree to Cara J. Walton, who was criminal justice major from Memphis, Tennessee.

Two alumni were presented with honorary doctorate degrees. James and Juliette McNeil were recognized for their professional accomplishments, as well as their commitment to and support of their alma mater.

During the Conferring of Degrees, students received individual name recognition while their pictures appeared on the screen.

“While the pomp and circumstance may look a little different this year, ASU is as proud as ever to honor this spring’s graduating class,” Ross said.

Ross noted ASU is committed to inviting the Spring Class of 2020 and the Golden Class of 1970 to campus for a formal convocation at a later date when it is safe to do so.

“We know that nothing will be able to replace a traditional commencement ceremony, but the faculty, staff and administration of Alabama State University felt it was necessary and most appropriate to celebrate the spring Class of 2020 on the day that so many have set their sights on, May 1.,” Ross said. Top of Form

Essence Editor-in-Chief Emerita Susan L. Taylor served as the commencement speaker. She acknowledged the importance of having this ceremony in order to express pride and admiration for the ASU graduates and their accomplishments.

Taylor, who also started the National CARES Mentoring Movement and authored the book “In the Spirit,” served as the leader of Essence Magazine for 27 years. She left the magazine to dedicate her life to “disrupt(ing) poverty,” and providing mentoring, healing and wellness services on a national scale for African-American children and others who were in need.

Her address centered on her life’s devotion.

“Have faith in the goodness of life and realize that when we strive to be kind and loving and true to our purpose, and leave our world better than we found it, everything we need to succeed in doing the work of life is given,” Taylor said

Taylor offered advice for graduates who are preparing to engage in the world in ways that are radically different from those they left behind.

“I think the most important thing that I can say to you is give yourself to yourself before you give yourself away.  Begin every day in stillness and in quiet. The answers that we always seek outside of ourselves really reside with us,” Taylor said.

Taylor’s speech was peppered with points of wisdom that many students captured and posted on social media: “Find an advocate, mentor and sponsor to get you to the next step;”  “Don’t be ashamed to ask questions;” “Do your homework and learn the language in the environment you are about to work in;” “Practice how to be on a team and lead a team without making people wrong (blaming and shaming them);” Know what you are talking about by doing research on the topic;” and “Learn analytics so people know you can do complex work”.

“One of the most important things I want you to know, and one that I have practiced, is to develop entrepreneurial skills,” Taylor said. “I’m able to follow my passion because of it.”

Taylor left the graduates with yet another step to success.

“Be a bold visionary and humanistic leader. There is a great need for you today.  Go and change the world, get it right for us.” Taylor said.