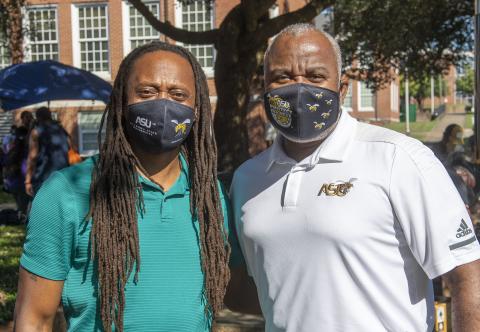 When television and movie writer/producer Saladin K. Patterson was a young boy growing up in Montgomery, Ala., he heard compelling “stories” that resonated and remained with him over time.

Now, those stories form the basis for one of his newest ventures—a ​​“reimagining” of the popular 1980s coming-of-age television show, “The Wonder Years.” Patterson is the show’s creator and one of the executive producers. He also is the showrunner. (To those of us who may not be industry savvy, the term “showrunner” means he is “the person who has overall creative authority and management responsibility” for the production).

A 1990 graduate of what was then the Lanier Academic Magnet Program, Patterson is a veteran of the entertainment industry who has written and/or produced some of television’s hit shows, including “Frasier,” “The Big Bang Theory,” “Psych,” “The Last O.G.,” “The Bernie Mac Show,” and “Two and a Half Men.” On the big screen, he’s written for movies such as “The Fighting Temptations.”

Patterson’s “The Wonder Years” is set in 1968 with an African-American family at its center. The show premiered in September and is already tracking to be as popular as its forerunner.

Patterson said he chose Montgomery as the show’s setting because of his experiences as a youth.

“’The Wonder Years’ is all about the nostalgia of growing up and the Universal experiences of adolescence, and you write what you know,” said Patterson. “And since my adolescence was spent in Montgomery, I really wanted to set it there because that just helps me creatively tap into those stories, those feelings. And also, it’s a setting in this time that we haven’t seen represented in this way before in terms of a show about a black family that, in spite of some of the obstacles of the late ‘60s, still had those universally relatable family experiences that most Americans had. I wanted Montgomery to be seen in that light as well.”

“The mother and father characters in the show are inspired by my Mom and Dad. That’s why I have the characters in the show (having attended) Tuskegee,” said Patterson. “My Mom and Dad both did; but in terms of their professions here in Montgomery, the dad character is (not only) influenced by my Dad but is also influenced by the father of one of my best friends growing up, Derek Handy, whose whole family was involved at Alabama State. His brother, Ron Handy, is a faculty member here in the music department. His mom and dad were both affiliated with the University both as students and as teachers. And so, I kind of wanted to give a little bit of an homage to them by letting the Bill character be a music professor here at Alabama State.”

Patterson joined the crew as they filmed a scene on the Academic Mall (Quad) of ASU. Co-Executive Producer and original “Wonder Years” child star, Fred Savage, was also on set as a director. In addition to Hill, the cast of the new “Wonder Years” includes Elisha “EJ” Williams as Dean; Saycon Sengbloh, Lillian Williams; Laura Kariuki, Kim Williams; and Don Cheadle who provides the adult narration of Dean’s childhood memories. Both Savage and filmmaker/TV creator Lee Daniels serve alongside Patterson as executive producers of the show.

Bringing “The Wonder Years” production to Montgomery was a large undertaking. ASU served as a base camp for the crew for several days. On Monday, October 11, a caravan of trucks and vans brought crew members, tents, tables, and equipment to the campus, filling up the mega-parking lot behind The ASU Stadium. Scenes were shot at several locations in the Capital City, including Alabama State University.

“We were happy to accommodate the production company,” said ASU President, Dr. Quinton T. Ross, Jr. “We appreciate Mr. Patterson for writing our University into the show’s script. I think it is particularly appropriate to include ASU since our professors, students, and alumni were at the center of the Civil Rights Movement, which was still very relevant during the late ‘60s. Having parts of the show filmed in Montgomery has also benefited some of our students who were hired as production assistants, gaining valuable experience working with industry professionals.”

Jeremy Stephens, a senior Theatre Arts Major at ASU, said he could not pass up the opportunity to work with the show’s production crew.

“It has been a wonderful opportunity for me to get this experience while still in school,” said Stephens. “We get prepared in school, but this real-world experience is what’s needed to propel us forward. I am so glad that I chose ASU. This University has truly prepared me for this opportunity. What my professors have instilled in me has really made a difference, and the people on set recognized that. I am all the more grateful to ASU for giving me experiences that will last a lifetime.“

Having the opportunity to expose students like Jeremy to his profession is a welcome bonus for Patterson.

“For me growing up here (in Montgomery), I didn’t know much about the entertainment industry; but by the grace of God, I was able to have some experiences that made the business something that I was aware of as a career opportunity and as a profession. It really boils down to young people being able to see different opportunities and see different options. There may be someone on this campus who gets to volunteer or even walk across campus and see our production and say, ‘hey, what are they doing?’ and then say, ‘this is something that could be interesting,’ or it could fit a skill set that they have or influence the classes that they take in terms of production. I really hope that we’re not just able to benefit from the look of the campus but that maybe we can inspire someone here that they can do what we do,” Patterson added.