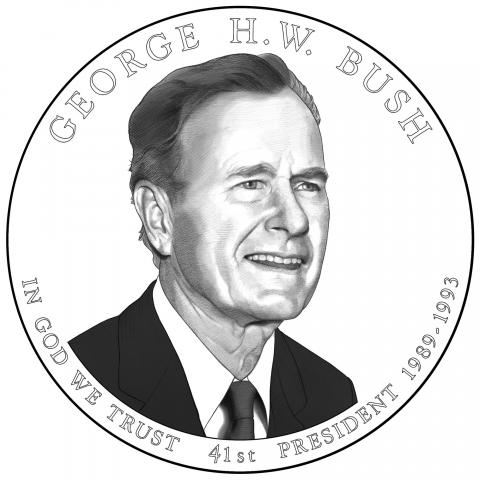 “I was absolutely thrilled when I found out my drawing for the coin was selected. I had to pinch myself. Especially as an immigrant, this is an amazing honor for me,” Hagler said.

Hagler immigrated to the United States from Tel Aviv, Israel, in 1985 at the age of 5 with her mother and grandparents.

The George H.W. Bush Presidetial $1 Coin features his smiling portrait with the inscriptions “George H.W. Bush” above his head with “In God We Trust,” “41st President,” and “1989-1993” at the bottom. The reverse side features a rendition of the Statue of Liberty, designed and sculpted by former Mint Sculptor-Engraver Don Everhart.  The inscriptions “2020,” “E Pluribus Unum” and the mint mark are incused on the coin’s edge.

“It was an honor to get to work on this program, and what a wonderful way to round out my first year of working in the United States Mint's Artistic Infusion Program,” Hagler said, noting that Mint Chief Engraver Joseph Menna sculpted her design.

Made for coin collectors, the dollars are produced and sold by the United States Mint. They are not distributed into circulation like nickels, dimes and quarters.

She pointed out that the former First Lady Barbara Bush is also being honored with a First Spouse Gold Coin. This coin features an obverse design by artist Benjamin Sowards and is sculpted by Phebe Hemphill. The reverse is designed by artist Barbara Fox and sculpted by John P. McGraw.

More than 400 people were initially interviewed for the Artistic Infusion Program at the United States Mint, and pared down to 27 artists. A number of these different artists are assigned to each program, such as the Presidential $1 Coin, and then the Commission of Fine Arts and the Citizens Coinage Advisory Committee reviews the candidates’ work and provides an official recommendation. In addition to the two committees, Hagler’s design also was favored by the Bush Family.  It was then up to U.S. Treasury Secretary Steven Mnuchin to make the final decision.

“I’m happy that my design will help illustrate the essence and shared heritage of our nation,” she said.

Hagler has won multiple prizes in painting and drawing and has exhibited her work across the United States and internationally. She is a staff writer for the popular blog Painting Perceptions and has taught fine art at Cornell College, the Delaware College of Art and Design, and at Swarthmore College. Her oil portraits and still-life paintings can be viewed at the Stonehenge Gallery in Montgomery. She juggles all this while taking care of her 9-year old daughter and 11-year-old son.

Hagler is beginning her fourth year teaching at ASU and said that she learns so much from her students, even while teaching them.

“I’ve had a fantastic experience working at ASU. I’m very grateful to work with the excellent people in the Art Department,” she added.