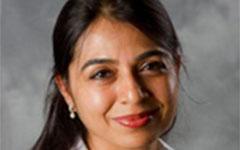 Thanks to a grant from the National Science Foundation (NSF), a greater number of heart patients will benefit from cutting-edge bypass graft research for vascular tissue regeneration that's being conducted at Alabama State University.

Universities across Alabama will profit from the $20 million, five-year grant from the NSF’s Established Program to Stimulate Competitive Research (EPSCoR), Connecting the Plasma Universe to Plasma Technology in Alabama (CPU2AL).

ASU’s portion of the grant is $350,000 and that includes support for research supplies, travel and graduate student internships.

Dr. Komal Vig, one of ASU’s nationally acclaimed research scientists, said the partner institutions will focus on understanding the processes and interactions of low-temperature plasmas and translating that knowledge to develop new technologies in the areas of aerospace, manufacturing, agriculture, food safety and medicine.

“My role is to develop vascular grafts with human endothelial cells (blood vessel cells) which can be used for bypass surgery instead of person`s own blood vessel,” said Vig, ASU principal on this project and who serves as co-principal investigator for the research. “I am also part of their management team; so, I’m involved in a lot of project-related decisions.”

In this effort, ASU is collaborating with the University of Alabama at Birmingham’s Center for Nanoscale Materials & Biointegration.

“They make the material and do plasma treatment and we do the biological assays to grow blood cells to make blood vessels on the grafts,” Vig said.

Plasmas – the states of matter consisting of collections of electrically neutral atoms, molecules and partially or fully ionized particles – make up more than 90 percent of the observable universe and underpin several high-tech manufacturing industries.

Alabama is one of five jurisdictions to have received this award through EPSCoR, which builds research and development capacity in states that demonstrate a commitment to research, but have thus far lacked the levels of investment seen in other parts of the country.

The grant also provides various outreach activities, including fellowships, to graduate and undergraduate students, according to Vig.

One such program is a 10-week corporate internship program on plasma technology applications for students pursuing degrees in STEM. The program provides students at CPU2AL partner institutions with quality experiences on plasma technology applications at private companies and allows students the opportunity to establish connections with industry and university professionals. It is open to undergraduate and graduate students in a broad spectrum of disciplines.

“The ultimate goal of the program is to engage a diverse, educated and skilled pool of scientists and engineers to promote long-term relationships between students’ academia and industry to enhance the Alabama workforce,” Vig said.