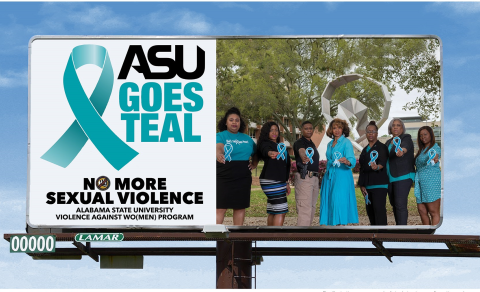 WHERE: The 'Stomp' at the Hardy Student Center Amphitheatre and the 'Play' at the Abernathy College of Education Auditorium.

In recognition of April as National Sexual Assault Awareness Month, ASU will sponsor two special programs to bring public awareness to the issue.

ASU's 'Violence Against Wo(men) Program' (VAWP) in coordination with the University's Theatre Department, Counseling Center, and others, will sponsor two free 'in-person' events on campus on April 7. A 'Stomp-the-Yard Battle' will be held from 11 a.m. -1 p.m. at the Hardy Student Center's Amphitheatre, and the play, 'I'm Still Rocking,” will begin at 6:30 p.m. at the Ralph D. Abernathy College of Education's auditorium. Both events are being held in an effort to educate and inform the student body and the public about the signs, dangers and preventative actions related to sexual assaults.

"To bring greater awareness to the crimes of sexual assault within our local community, Alabama State's VAWP is joining with the ASU Counseling Center, the University Theatre and others to host two events that we hope will help better define what constitutes sexual assault, stalking, domestic violence and similar offenses that we refuse to tolerate," said Sergeant Kimberly Todd, criminal investigator with ASU's Police Department, and the University VAWP liaison.

Todd believes that these two April 7 events highlight the University's commitment to its policy of zero tolerance of sexual assault crimes.

"Among some of the major issues affecting college campuses and communities across the nation are sexual assault and related crimes," Todd stated. "While we have been blessed over the decades at ASU with a minimum occurrence - that we believe may be traced to the University's increased and out front educational efforts and its no tolerance attitude - we still feel it is important to continue this effort in a very public way, which educates our students and the greater Montgomery community on the importance of preventing and reporting all instances of these crimes."