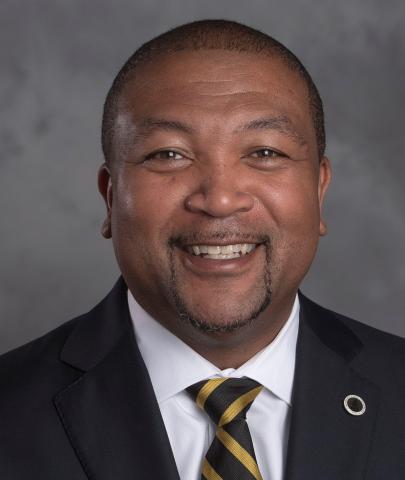 - Madison, also an ASU Board of Trustees member, is recognized for his spirit of giving.

Alabama State University alumnus Delbert Madison ('93) was taught early in life that it is “better to give than to receive.”

Madison embraced this message as a life lesson, which earned him the recognition of being named the 2021 Outstanding Philanthropist of the Year, which was awarded by the Association of Fundraising Professionals of Central Alabama (AFP-CA).

Madison serves with distinction as a member of the Alabama State University Board of Trustees. Professionally, he is an executive with ServisFirst Bank in Montgomery, where he is the senior vice president of Cash Management.

"This award means a lot to me professionally and personally because it speaks to the work that I have done within the Montgomery and River Region community over the last two decades, which has been heartfelt and done without ever desiring to seek or obtain any type of recognition or award for it. It was done simply out of my caring and love of helping people in need, lifting-up good causes and supporting deserving institutions," said Madison.

Chacolby Burns-Johnson, the president of the AFP-CA, stated that Madison was selected for the organization’s top recognition based on all that he has done throughout his “lifetime of giving.”

"I am proud to honor Mr. Madison as our Chapter's recipient of the 2021 Outstanding Philanthropist Award. This award is set aside to recognize those making a valuable and lasting impact across the globe and in communities with their time, talent, and resources. He is a hometown hero, and we applaud and thank him for his selfless service and support to others," Burns-Johnson stated.

ABOUT THE ASSOCIATION OF FUNDRAISING PROFESSIONALS

The Association of Fund Raising Professionals of Central Alabama has served for more than 60 years as the standard-bearer for ethics in fundraising. The organization’s purpose is to stimulate a world of generosity and positive social good through best practices in fundraising. The AFP-CA is a group of fundraising professionals and nonprofit leaders who connect supporters to the areas most important to them with a critical mission to meet the needs of clients and communities. It is the link to sharing information, creating and executing innovative ideas, pushing for social change and movements, and providing connections to individuals, corporations, foundations, and others to do good work that matters most to humanity. AFP-CA’s guiding principles are ethics and trust, and the organization strives to produce champions of ethical fundraising, and fundraising professionals whose work is to increase public trust in charitable giving.

Madison had an emotional initial response to learning about winning the award.

"I broke down briefly and had a moment of remembrance for all of the many things that have added up to bring me to this point in my life."

Madison recalled that over the last 20 years, he has been involved in a diverse array of charitable giving campaigns, including initiatives by Alabama State University, the River Region United Way, the American Red Cross. Child Protect, the Montgomery Zoo and the Metropolitan YMCA, to name a few.

"Although all of the organizations that I just mentioned have had a role in helping, all of which are important and worthwhile, I am most proud of starting last year the Delbert B. Madison, II Foundation," he stated.

The foundation was founded in 2020 to honor his late son.

"Some of the people involved in awarding me this recognition stated that my activity in charitable giving over many years was foremost in their minds, but with my recently establishing a charity that also honors my son's memory, it touched them and played a role," Madison said. "That makes me feel better both about this year's award and in knowing that my son's name will not be forgotten and that people will be helped in and through a charity bearing his name, which allows us as a family to help turn tragedy into triumph."

About the Delbert B. Madison, II Foundation: For more information or to donate, click: dbm2foundation.com