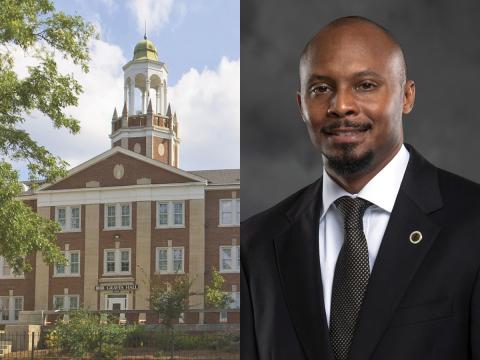 The Alabama State University Board of Trustees (B0T) voted on Friday, September 18, 2020, to remove the name of Bibb Graves from one of its historic residence halls.

The move came at the recommendation of President Quinton T. Ross, Jr. who had empaneled a committee to research campus buildings that may have been named for persons with strong ties to racist organizations. The research was led by Dr. Janice Franklin, dean of the Levi Watkins Learning Center and University Archivist, Dr. Howard Robinson.

Robinson presented the committee’s findings to the BOT on August 28. The report was expanded to include not only buildings, but also streets that traverse through the campus.

Ross said he will make a recommendation of a new name for the building at a later time.

The Board also gave approval to President Ross’s recommendation of Dr. Carl Pettis as the Provost and Vice President of Academic Affairs for Alabama State University.

Pettis, a graduate of ASU, has held the position of Interim Provost for the past two years. A veteran educator, Pettis has served as a professor of Mathematics at ASU for 14 years. He has achieved success at varied levels of academic leadership at the University.

Ross said his recommendation comes after a nationwide search to fill the position.

“I am excited to make this recommendation,” said Ross. “Dr. Pettis has the academic background and leadership skills to serve as Provost, and he certainly has proved himself to be able to handle the responsibilities of this position. Dr. Pettis has helped to maintain the academic stability of this University even in the midst of a pandemic,  and has my full confidence to serve in the capacity of Provost. I am particularly pleased that we are able to elevate one of the Sons of ASU to this position of leadership.”

Pettis said he is humbled to be selected to serve his alma mater in this new capacity.

“I would like to thank President and the Board of Trustees for the recommendation and vote of confidence,” Pettis said. “As I look upon this moment, I am truly grateful to my parents and the countless mentors here at Alabama State Universities and others who have poured into me over the years. They all helped me to become the academic leader that I am today. I look forward to leading the Office of Academic Affairs. I believe that Alabama State University has a wonderful opportunity to continue to build upon the academic legacy that the institution has portrayed for more than 150 years.”

Dr. Carl S. Pettis is a proud alumnus of Alabama State University (ASU). Dr. Pettis was awarded the Bachelor of Science degree (2001 Major – mathematics and minor –   computer science) and the Master of Science degree (2003 Mathematics) from ASU. Dr. Pettis received his doctorate degree in mathematics from Auburn University in 2006. He was the first graduate of the Alabama Bridge to the Doctorate Program. He has since published a number of research articles in the area of Design Theory. Dr. Pettis  serves as Provost and Vice President for Academic Affairs. He is also a professor of mathematics in the Department of Mathematics and Computer Science at ASU.

Whenever he is asked, what made you choose to return to ASU, Pettis simply responds, “Where else but the place that helped to shape and mold me into the man that I am today would I choose as my professional oasis, a place that will allow me to shape and mold the lives of others.”

“I would be remiss if I did not mention my wife, Cheryl (also an ASU graduate) and my daughter, Chloe, as being my most fervent supporters. My family and I are grateful to ASU for this opportunity.”