Students Rally for Right Reasons at 'Walk the Swag' 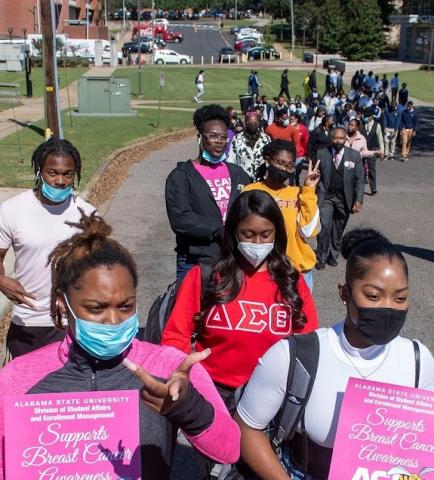 - A throng of students attended to show solidarity and marched across campus to bring awareness to important issues.

The Equinox area of campus was alive and buzzing with activity by Alabama State University undergraduates, Hornet family members and students from Montgomery's Valiant Cross Academy, all voicing their concern and exhibiting their support to bring attention to the issues of domestic violence, suicide prevention and breast cancer awareness. The event was organized by Courtney Foster, a senior business management major who said it was time to “make noise” about finding solutions to these issues that negatively impact so many people in America.

"I am motivated to organize this event so that all of those people affected by the issues of domestic violence, suicide or breast cancer and who are too traumatized or shy to speak out will see that people support working to end these issues and we are glad to speak for them by expressing their opinions," Foster said, as she "walked the swag" by marching toward The ASU Stadium.

"Today went very well, and I am especially happy about seeing the large number of young men from Valiant Cross present and participating in the entire event because I feel they are at a crossroad in their lives between youth and adulthood; so it is important for us to help enable them to understand what it means to act responsibly," said Foster, a native of Baltimore, Maryland.

A Valiant Cross Academy high school junior, Noah Waters, was among his school's many representatives attending the event and marching to the stadium to participate in the closing balloon release.

"We are here today because we want to show our support in ending domestic violence, to see more research provided to do away with breast cancer and to help people realize that there are alternatives to killing themselves because every life is important and that nothing is so bad that someone needs to destroy one of the greatest gifts given to them by God, which is life," stated Waters, who plans to attend ASU upon graduation.

MANY ASU AND COMMUNITY LEADERS WERE PRESENT

"I want to thank Alabama State for organizing this event because we all need to reclaim our voices, which will empower victims and help end unhealthy behavior," Moncrief stated.