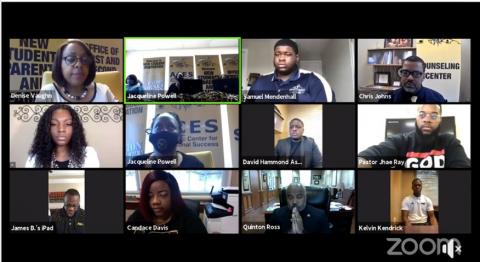 The service for Kyndel Burroughs and Jada Harris was broadcast live over social media at 12:30 p.m. on Friday (August 28).

Kyndel Burroughs, a junior from Charlotte, N.C., died from injuries he suffered in an accident at his off-campus apartment. Kyndel was a member of the Mighty Marching Hornets Band.

Jada Harris, of Ervin, Texas, had recently transferred from Stillman College. She died from injuries she suffered in a car accident on August 19. Jada was beginning her first year at ASU and had dreams of becoming a Stingette.

“I never got the opportunity to meet Jada, but I did have the opportunity to meet Kyndel,” said SGA President David Hammond. “Kyndel had a certain energy about himself. I can’t recall a single interaction that I had with him that he didn’t smile. So in this time, let us smile. Let us say not in grief that they are no more, but let us live in thankfulness that they were. It has been said that the measure of life is not in the duration but it is in the donation. Kyndel and Jada will forever live in our hearts, thoughts and deeds.”

Like Hammond, Miss ASU Yasmine Whitehurst had fond memories of Kyndel. She said she has learned more about Jada since her passing.

“Kyndel, my brother, was full of life,” Whitehurst said. “He was a true bandsman, who loved his section, his class and the Mighty Marching Hornets. He always knew how to make everyone laugh, and he wanted to dance until he couldn’t dance anymore. And through my amazing four years of knowing Kyndel, I never saw him in a bad mood and I know he would not want us to be in one."

“I didn’t know Jada personally, but I do know that she was a very talented, very dedicated and a beautiful young lady; who was not afraid to chase her dreams. Transferring to a completely new school and auditioning for a completely different dance team isn’t easy. Trust me, I know. But I can consistently see the passion she had for dance through her eyes and her performance. We can hold on to that passion ourselves and let that inspire us to achieve greatness.”

President Quinton T. Ross, Jr., gave words of comfort to the students’ families and to the Hornet Nation.

” One of the most difficult tasks that I have as President is to call the parents and talk to the parents of those who have lost their children. But it’s more than that to me because when I call, I don’t call as the President; I call as a parent. I call as a father, and I call as someone who loves every student on this campus as his own. So today, I say to the Burroughs family and to the Harris family, thank you for sharing your sweet, precious (children) with Alabama State University. They are, and you are forever members of our ASU family. I just pray that God continues to strengthen each of the families during this time and give you the peace that surpasses all understanding. To my students, to the faculty and to the staff, death’s sting has again come upon our family, and while our Biblical teachings say that none of us know the time or the hour, and that we all must go, the sting of death still hurts. While we celebrate the lives of our dear Hornets, I know the sting of death still hurts. But what I ask each one of you is to embrace those memories that you have of Kyndel and Jada because they are and will forever be with you. I ask that you embrace one another, love one another and that you’re there for one another as the ASU family always is during these times. I ask that you all pray for the Burroughs family, pray for the Harris family and pray for one another.”

One of the most touching tributes came from longtime band director, Dr. James Oliver. Kyndel was a veteran Marching Hornet.

”Kyndel was the type of young man that was always smiling,” Oliver said. “He never gave me one issue. He showed up to every practice and he would have that smile. It didn’t matter how long we practiced. He would be there. And he would stick his head in my door sometimes and just speak. We voted on Kyndel in July to be the French horn section leader. He was going to carry that section. He was just a good kid and he’s going to be missed by all of us.”

Oliver said Jada had been practicing for tryouts the night of her accident. He recalled the last words that he spoke to her and the others who were working out at the ASU Stadium.

“I told them all to be safe. Those were the last words that I said to them. So when I got the call the next morning about 6:30, it hurt; and it still hurts. I’m really dealing with that and with Kyndel. They were both really wonderful. I just wish I could have a bunch more (band members) just like them,” Oliver added.

The president of the Stillman College Student Government Association, Samuel Mendenhall, Jr., was also invited to participate in the program to give remarks about Jada.

Funeral services for the two ASU students will be held on Saturday, August 29, in their respective hometowns.