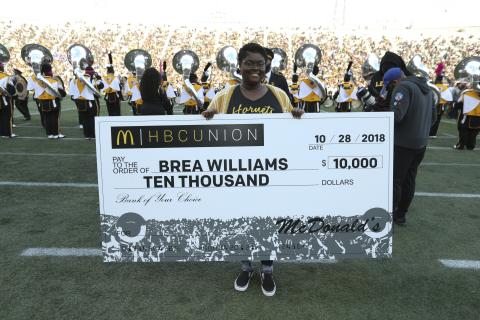 The 77th McDonald’s Magic City Classic may have been an all-out rivalry between two Alabama football teams and two world-class marching bands, but it was also a victory for Alabama State University (ASU) junior Brea Williams. McDonald’s presented Williams with a $10,000 'True to the HBCU' scholarship, which was facilitated by The Thurgood Marshall College Fund, during halftime at the legendary football classic held in Birmingham's Legion Field.

This is the second of four scholarships that McDonald's has presented to commendable students to help cover higher education expenses, such as tuition, room, board and books.

While maintaining a 3.8 grade-point average at Alabama State University, Williams is actively involved in what ASU President Quinton T. Ross, Jr. calls "CommUniversity," which is reaching out and helping build bridges between the community and the University. In Williams case, she does so by serving in her community through academic mentorships and with voter registration efforts. The Virginia native also volunteers as a teacher’s aide at the ASU Zelia Stephen's Early Childhood Learning Center where she helps preschool and kindergarten children.

“Attending an HBCU means I am a part of history," Williams said.

"I chose to attend an HBCU because the experience is like no other, from the rich history that you feel as you step onto any campus to the family-like atmosphere. I strongly believe in my African-American community, and the potential that it possesses, which is why Alabama State University was my only choice for my undergraduate degree,” Williams added.