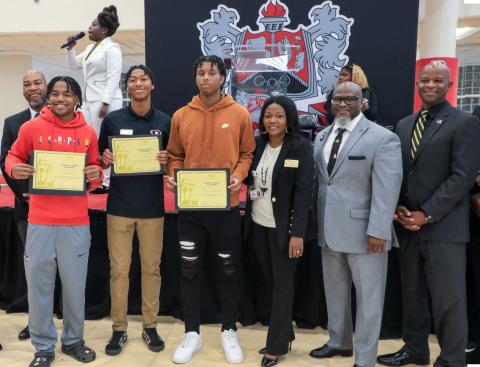 “This was a great opportunity for us to connect with our students from the Atlanta area. We had an opportunity to engage our alumni, who came to a lot of the events at the schools that we visited and worked with ASU faculty, staff and students who were on the trip. It was like a family affair across the board. Everybody helped to recruit the best and brightest out of the Atlanta area,” said Freddie Williams Jr., Assistant Vice President for Student Affairs/Enrollment Management/Admissions and Recruitment.

Like the University’s spring President’s Tour,  a special moment of the event was the awarding of scholarships, including on-the-spot and academic scholarships, Black and Gold scholarships, as well as the President’s Promise Scholarship, valued at $8,328 annually, which was awarded to out-of-state students.

“Onsite transcripts were also collected so prospective students could have a chance to qualify for potential scholarships,” Williams added.

At each school stop, the University hosted college fairs so students could get a closer look at ASU and its degree programs.  The students and residents also learned about ASU's story: that it is America’s oldest state-sponsored HBCU, founded in 1867 by nine formerly enslaved men and that  the University is continuously transforming as a world-class institution of higher education and scientific  research.

Because of health and safety concerns, the tour did not include an alumni reception or signing of a historic MOU agreement with area community colleges.