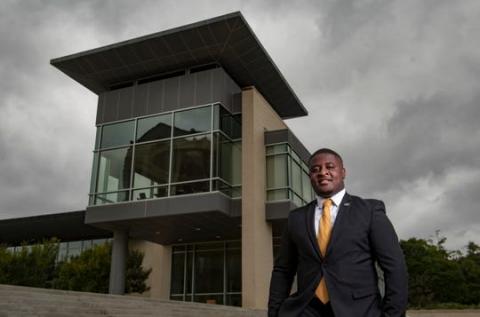 Below is part of a news profile of Alabama State University's Student Government Association President David Hammond, which was published in the Tuesday (Oct. 6), edition of The Montgomery Advertiser.

It was written by one of its senior reporters, Safiya Charles.

Hammond, an ASU senior and Phenix City native, discusses his love of the University and how the discipline of being a high school football player helped him to learn about leadership from the sport's field.

For the full story, plus a gallery with dozens of photos, click the link below:

Accept and adapt: How sports prepared Alabama State's student president to lead in 2020

“That wasn’t my speed,” said Hammond. He was used to running plays.

As an offensive lineman at Central High School in Phenix City, Hammond’s focus didn’t stray too far from the football field. That changed after time spent at ASU.

In late April, students elected Hammond as their government association president after a successful term as the body's secretary. He credits much of what he’s learned about leadership from lessons on the sports field.

This final point is one he’s sought to embrace this year, as COVID-19 has redefined the meaning of a typical “college experience.”

With no Labor Day Classic, the longstanding and highly anticipated matchup between ASU and Tuskegee University, and large in-person gatherings discouraged, Hammond and the SGA have been challenged to find new ways to engage students. While the effects of the pandemic have made his role as their chief advocate even more important.

“The biggest thing right now is technology. Usually students would be in class and you’d have some students on campus doing work. Now you have the whole entire campus on your WiFi,” said Hammond.

ASU’s Office of Technology Services is currently working to enhance the speed, he said.

For the full story, plus a gallery with dozens of photos, click this link: