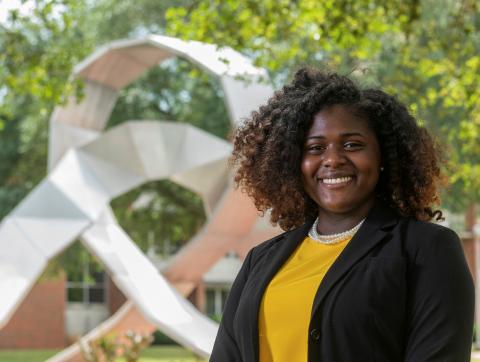 The inauguration for Alabama State University's Student Government Association's (SGA) officers will be held on August 30 (Monday) in the Ralph David Abernathy College of Education's auditorium. The investiture ceremony will be held from 6 p.m. - 8 p.m. with a post event reception held in the J. Garrick Hardy Student Center's ballroom.  The event is free and open to all in accordance with the University's COVID-19 protocols, including social distancing and a mask-mandatory requirement for all in attendance.

"This SGA election was historic in nature to me and many others because the officers are composed of a majority of females with exactly three of the four officers, including the President, Vice President and Secretary, all being women," said Brewster. "I have had several opportunities to sit down with all four of our student leaders, and I am excited at seeing these great individuals lead our student body." NOTE: This majority of female-led SGA officers has only occurred once before in recorded SGA history.

Brewster explained that all of the officers are an "engaging" group of diverse students with one goal in mind -- to provide committed and impactful service to Alabama State University’s students.

SGA President Gem Richardson, a biology, pre-health major, said the official inaugural ceremony will follow the traditions held at previous SGA swearing-in events, but with her special touch of having the inaugural colors composed of red, white and blue decorations being displayed in the Abernathy auditorium.

"We will have a program that includes presentations made from the stage, musical performances, my inaugural address, and several delegations of visiting SGA officers, which will include those from Tuskegee and Alabama A & M in attendance," said Richardson, a Henry County, Georgia native.

SGA Vice President Brown, a native of Jackson, Mississippi, explained in an earlier ASU news interview that the times that the SGA officers are in office are especially challenging because of COVID-19, and she is appreciative of being supported by a majority of the University's students.

“We had some challenges, but all of our tears and sleepless nights paid off. I am thankful that the student body trusted, believed in, and elected me,” said Brown, an ASU marketing major.