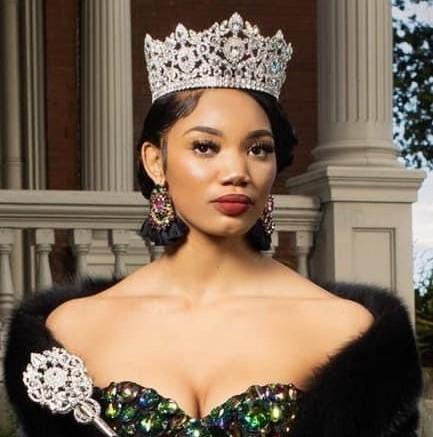 Alabama State University's campus is graced by the presence of royalty this year as three University students are part of the royal court of Mobile's oldest African-American Mardi Gras organization. ASU student Mackenzie Alexis Crosby holds the coveted title of the 2022 Junior Queen of the Mobile Area Mardi Gras Association (MAMGA). The royal adult court also includes two University students; former Stingette, Alexis Dees, who is a “Lady of the Royal Court” and Dylan Stallworth, a member of the ASU Student Government Association, who serves as a “Knight of the Royal Court.”

These three University students, who all hail from Mobile, are about to participate in such once-in-a-lifetime events as a royal coronation and other festivities sponsored by MAMGA, one of the nation's oldest African-American Mardi Gras groups. Their titles represent some of the highest recognitions that may be achieved in Mobile's African-American celebration of Mardi Gras.

"I am so grateful, appreciative, excited and honored to have been chosen by the leaders of The Mobile Area Mardi Gras Association to be its Junior Queen in 2022," said Mackenzie Alexis Crosby, an ASU freshman, studying forensic biology. "I will reign as its junior queen, who has always been a high school senior up until this year. I am among those making history…due to the COVID-19 pandemic. Since our Mardi Gras events were all cancelled in 2021, our organization's leaders have graciously allowed us to have our coronation and reign in 2022. I feel that in-person events are so much more memorable and festive than a virtual event.”

The principal of Montgomery's Lanier High School, Joseph Roberson, is an aficionado of Mobile's MAMGA and is well-versed in its history. He was King of the MAMGA Mardi Gras in 2007.

"The Mobile Area Mardi Gras Association is a non-profit organization that was formerly known as the Colored Carnival Association," Roberson said. "It was incorporated in 1938, held its first parade in 1939 and presented its first royal court in 1940. It has both a youth (high school) and an adult component, and is an organization with a commitment to lifting up our youth, (of) which we are most proud."

"Mackenzie, as the junior queen of MAMGA, represents everything we look for in our queens and kings. She is a wonderful beacon of the best qualities of life and hope, which we desire for those who reign in this most important position," Roberson added.

The Junior Queen’s mother, Angelia Davis Crosby, also attended Alabama State University and is a member of the class of 1995.

"To have my daughter reigning as the junior queen of Mardi Gras is a most enjoyable moment for me and her father (Tyrone Crosby), which allows us to revel in the fruits of our labor in helping to raise such a wonderful young lady," stated Angelia, with a voice full of emotion. "However, beyond the Carnival season and my daughter being a queen, I must also say that having Mackenzie attend my alma mater, ASU, is the cherry on top of the cake."

"I bleed ‘black and gold,’ and so many members of our family attended the University, which includes my sister (Bridgette Davis Ford) who is a member of the class of 1997. I love everything about The Alabama State University and we are elated that she chose one of the nation's finest schools and one that is an HBCU (Historically Black College or University)."

Queen Crosby said that a royal dinner will be held in her honor on Feb. 13 with more events forthcoming that are part of the Mardi Gras season.

"I am soon to be officially crowned and I am looking forward to all of the pageantry that goes with it, as well as the subsequent time in which I will reach out and mentor high school girls about how to comport themselves as ladies, give of themselves to charity, show respect to others and themselves, and find happiness in all of the right places," Crosby stated. "This Mardi Gras honor and everything about it would have never happened if it had not been for the love and support of my Mom and Dad, both of whom helped me emotionally, mentally, spiritually and financially --  because this took lots of support and a great monetary commitment from both of them. I so love and cherish both my Dad and Mom immensely," Crosby exclaimed.

Like her mother, she also loves Alabama State University.

"In the short time that I have been at ASU during my freshman year, I have grown to love it as if it were a living, breathing, member of my family," Crosby said.

"I love Alabama State University, its faculty, staff, my fellow students, and of course, 'The ASU Experience,' which is great and positive and is what it is all about."

AUTHOR'S NOTE: The Mobile Area Mardi Gras Association has a deep connection with Alabama State University that dates back to the early 1940’s. Many ASU alumni have served on MAMGA’s Royal Court as either a King or Queen. Below is a partial list of the royal Hornet lineage: