Rapper 2 Chainz@ASU; Performs for Students in the University’s Stadium! 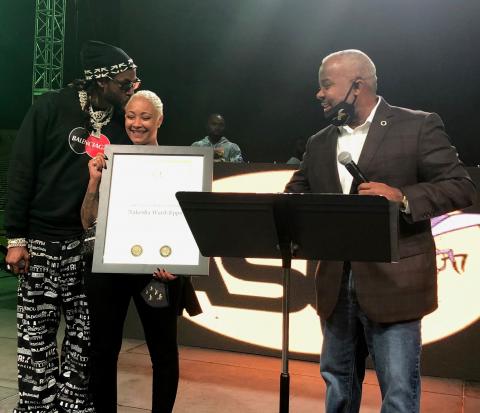 Superstar Rapper 2 Chainz Performs for ASU Students in the University’s Stadium!
- One of ASU's most famous alumni provided a free concert JUST for ASU's students.

- He and his wife Nakesha Ward Epps are both ASU alumni and both received "50 Under 50 Awards."

- ASU students attended with strict COVID-19 protocols in place throughout.

The energy and excitement that poured out of the Alabama State University Stadium on the evening of October 12 was as palpable as that coming from a Labor Day Classic game.

But this wasn't football.

It was cutting-edge music coming from a free concert held exclusively for ASU's student body by one of the nation's superstar rappers, who just happens to be one of the University's most famous alumni, known professionally as " 2 Chainz."

Even before the event took place, the announcement caused quite a buzz on social media when ASU students received their notices from the University. More than 3,000 students are estimated to have swarmed to the stadium for the concert. The event followed stringent safety protocols developed for the University’s commencement ceremonies that will take place in November, including social distancing, temperature screenings and wearing mandatory masks at all times. The stadium has seating for more than 25,000.

The performance marked the first time that a concert was held on the field in the ASU Stadium. Organizers worked for several days to plan for the event that included a large stage and professional rigging for sound. The stage also featured an elaborate screen that provided a backdrop of sensational videos to add to the excitement of each performance.

"We were so excited to welcome 2 Chainz and his wife Nakesha back home to ASU. For him to be able to provide a free concert just for our students was an incredible act of gracious love and giving to the ASU Hornet Nation,” according to Jennifer Anderson, ASU's director of Development and the event's coordinator. “He wanted to do this for his fellow Hornets as a way of giving back to the University that he loves so much."

"As President of Alabama State University, I have the pleasure annually of acknowledging 50 University alumni under the age of 50 years-old who have made an impact in business, education, science, medicine, sports, law, government, media, entertainment, the arts community, religious leadership and organizational leadership. Tonight, I honor both Tauheed and Nakesha Epps," Ross said.

During the presentation, President Ross acknowledged the depth of the musical ability, innovation, professional acumen, charity and largess that the couple possesses, which led the school to award them this most important alumni award.

Dr. Ross cited the following individually for Nakesha Epps: "She is the director of a pre-school education center named ‘A Gift from Heaven’ and the founder and CEO of ‘Bouncing with Harmony, LLC and co-founder of the TRU Foundation," Ross said.

For 2 Chainz, the ASU President stated during his presentation: "A 2000 graduate of ASU, Mr. Tauheed Epps, professionally known as 2 Chainz, is a rapper, songwriter, media personality and basketball player. As a student at Alabama State University, Mr. Epps was a scholarship student majoring in psychology and a member of the Hornets Basketball Team. In addition to his work in the music industry, 2 Chainz is co-founder of the TRU Foundation with his wife," Ross stated.

"It was an amazing evening to have such an important national recording artist also be a member of our University's family. To engage the students with such awesome entertainment and fun was beyond wonderful. I hope this is the first of many times he is on our campus," Hammond said.

The SGA President said what put the event over-the-top for him was the ASU Mighty Marching Hornet Band’s performance with 2 Chainz.

Although director Dr. James Oliver and the band are no strangers to performing with national celebrities and at large events, Oliver said the Monday night concert was right at the top of his all-time favorites.

"One of the highlights of my professional career to date has to be our Mighty Marching Hornets Band playing 2 Chainz' new big, big, hit "Money Maker," while he sang the lyrics. We played the music, he sang the words and I got shivers up and down my spine. The man is a great talent, an ASU graduate and a nice person. I thank him for supporting our ASU in such a huge manner," Oliver said.

The concert was videotaped and will be part of YouTube’s “HBCU Homecoming 2020: Meet Me on the Yard.”

In addition to 2 Chainz, performers for the event include Chloe X Halle, Saweetie, NLE Choppa, Tye Tribbett and more. The event will air on YouTube at the following link on October 24 at 7pm CST: