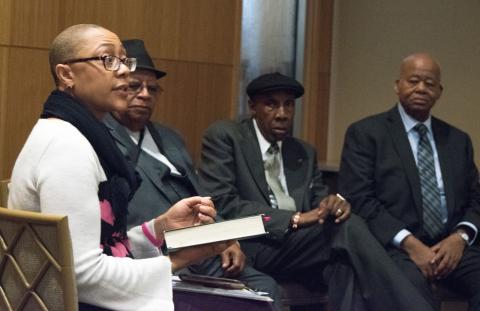 Days later, all of the 29 sit-in students were harshly disciplined by the  all-white Alabama State Board of Education, upon the recommendation of then-Gov. John Patterson.  Nine students were expelled and the rest placed on probation.

Three of the living students who participated in the historic ‘60s lunch counter sit-in – St. John Dixon, James McFadden and Joseph Peterson -- gathered on ASU campus to discuss that history-changing day and the aftermath of that day.

None of them was surprised when cafeteria workers refused to serve them, but they were all shocked when school President H. Councill Trenholm expelled them at the insistence of Gov. Patterson.

“I asked then-President Trenholm why he would go along with expelling me from school and he said ‘Due to the circumstances that you are not obeying the rules and the rights of the State of Alabama, I have no other alternative but to comply with the governor.’  That hurt me. In fact, Trenholm’s statement still rings in my head,” Dixon said.

When Peterson received word of his expulsion, he was in disbelief.

“I was trying to figure out how in the world I would make a living without a college education.  Being thrown out of ASU was kind of traumatic to me,” Peterson said, who was eventually accepted at New York University and worked for the Southern Christian Leadership Conference.

Peterson said after he was expelled he lost his GI Bill Benefits because of “disorderly conduct” at Alabama State. But he has no regrets in participating.

“The whole South needed to change,” Peterson said, adding he did get his GI Bill Benefits reinstated years later.

McFadden said a lot of students had been forewarned that expulsion was on the table.

“Students had to make that decision.  For me, I showed up. I was sick and tired of being dehumanized by officials who was carrying out a different Constitution,” McFadden said.

Years later, Dixon said he found out that Trenholm was forced to obey because Gov.  Patterson said if he didn’t follow those actions, he would take all the monies that the state pays to Alabama State University and close the school. “I would never be a person to close a great institution like Alabama State.”

The sit-in movement in the United Stated spread throughout 12 states and more than 55 cities.

For fifty-eight years, that blemish of being expelled stayed on the students’ record, through college transfer applications and job interviews.

On May 20, 2018, the sit-in students’ records were expunged, along with the records of four faculty members who were fired for being “disloyal,” by interim Superintendent of Education Ed Richardson.

In the letter addressed to ASU President Quinton T. Ross Jr., Richardson called the action “unjustified and unfair.” Ross held a news conference to share the letter, where several of the expunged students and local and state dignitaries attended. .

When asked if they felt exonerated, McFadden quickly answered.

“For me it was business as usually,” McFadden said. “Writing an apology really didn’t change anything. What I would like to see the State of Alabama do is to begin to make the playing field level.”

He explained that Alabama State should be treated the same way as some of the other institutions in Alabama.

“I believe you begin to move in the right direction if this happens,” McFadden said. “I believe in moving from theory to practice. A theoretical position is to say I made a mistake and that was wrong. I want to see the practice that corrects that wrong.”

Peterson said the now-Superintendent of Education issued the apology, but he had hoped the apology came from the top.

“I believe the apology should come from the governor’s office and not the superintendent’s,” Peterson said.

The three said if they were in the room along with the former Gov. Patterson, now 98 years old, they would have a conversation with him.

“I would tell him I don’t hate you, I dislike what you did to me,” Dixon said.

McFadden said his conversation would be a little different.

As for as an apology from Patterson, Peterson said “I don’t expect to get anything from him.”

Peterson, McFadden and Dixon said they all got involved in the fight for justice as students at ASU.  The sit-in students risked everything, even their lives to stand up for equality in a segregated South.

“I decided to participate in the sit-in even though I knew I was taking a chance on my life,” Dixon said. “During those years, people were beaten and hosed down and all kinds of things happened. But I wanted to fight the injustices around us.”

McFadden agreed. “Coming to Alabama State University at that particular time in history was a life-changing experience. It created all types of relationships, and it created friends as well as enemies.”

That commitment to the fight has continued throughout their lives.

To students, McFadden urged them to get into the fight.

“Each one of us who develops to the point of experiencing and seeing injustice has a responsibility to work toward justice,” McFadden said. “We must be clear that if you do not fight injustice wherever you are it will be at your doorsteps next.”

The willingness of these black students to challenge the authority of the state placed them on the frontline of the civil rights movement, where they remained for decades. 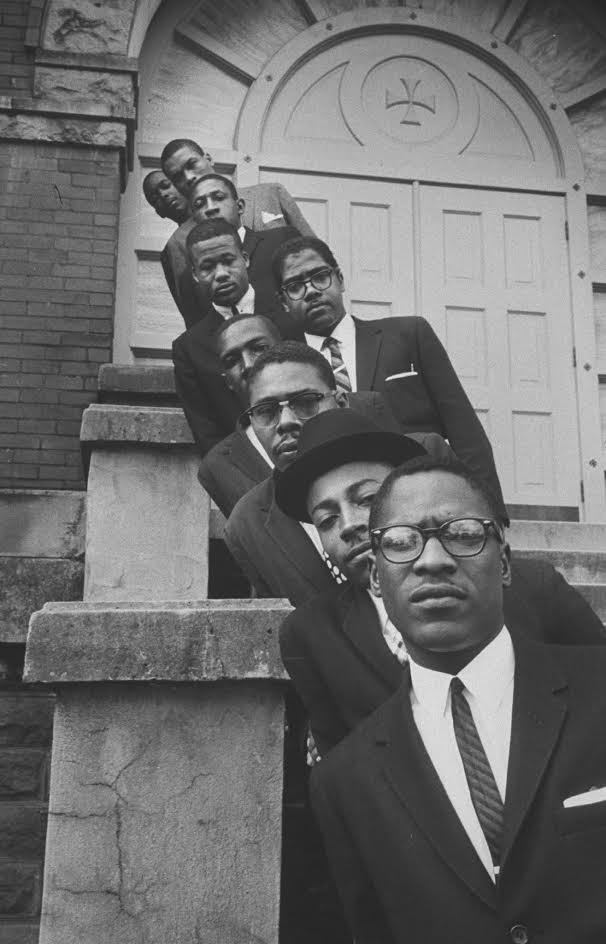 Photo of the nine Alabama State University sit-in students who were expelled.