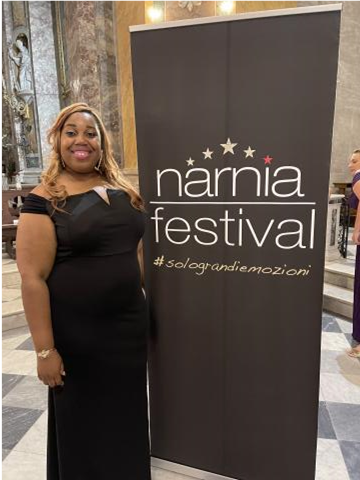 For Dr. Cordelia Anderson, the summer of 2021 was a dream come true. Not only was she awarded a highly competitive fellowship, she also had the opportunity to be featured in three performances in Narni, Italy.

Anderson, an ASU alumna and assistant professor in vocal studies in the University’s College of Visual and Performing Arts, received a $5,000 Music Fellowship from the Alabama State Council o​n​ the Arts for her exceptional works in the arts.

The Council’s fellowships are grants awarded to outstanding individual artists and arts educators in Alabama who create important works of art and make valuable contributions to the entire state.

Anderson was recognized for her past works, for her dedication to performing online recitals and concerts during the ongoing pandemic and as a featured artist for the 2021 Burleigh Festival Unlimited, sponsored by Big Blue Opera Initiatives at Tennessee State University.

“I do a lot of community performances.  I’ve performed at the festival every year in Nashville, which landed me the honor of being this year’s Festival Artist. Students from ASU performed at this year’s showcase alongside me. The Alabama Council o​n​ the Arts recognizes and honors fellowships for works such as these. I‘m representing  the state of Alabama,” Anderson said.

Recipients can use the funds to set aside time to create art, improve their skills, pursue professional development or do what is most advantageous to enhance their artist careers. The Birmingham native decided to use her funds to assist her while performing in Italy.

In Narni, Italy, she performed two opera roles and sang at a formal concert with the Narni Orchestra during her international debut at the Narnia Vocal Arts Festival.

Anderson performed as “Dulce Arpista” in Pietà, a new opera written by Jake Landau and directed by Andrea DelGuidice, and as “La Suora Zelatrice” in the classic Puccini opera, Suor Angelica.

“I was so proud to represent myself and THE Alabama State University in Italy this summer,” Anderson said, noting the Festival has invited her back next year. “I’m so happy and fortunate to be one of the alums to do that.  Performing in Italy was one of my goals.”

Anderson emphasized she was the only African American in the program.

“I felt alienated but proud to be a black woman and have the opportunity to be there. It was so worth it to get the experience that I gained, and for the relationships that I formed,” she said.

During her career, Anderson has performed for the unveiling of the U.S. stamp of world-renowned opera singer Marian Anderson, as well as the American Institute of Musical Studies (AIMS) program in Graz, Austria.

She was a Young Artist for Opera Las Vegas for two full seasons and a performing participant of the Lauren Flanigan Audition Bootcamp in New York City.   Anderson has toured all over the world (most recently Spain, Croatia now Italy)  performing operas and African American art songs and spirituals.

Anderson said because of the foundation she received at ASU, she is able to accomplish career milestones.

“I wouldn’t be doing what I’m doing and going the places that I am without that ASU foundation. So, I’m grateful to be back at ASU in teaching and giving back, to showing students that we can sing any kind of music, including opera, and dominate that field just as well as any other music field.  It’s been an amazing ride and I thank ASU for that,” Anderson said.

Her next big goal is to perform at the Metropolitan Opera in New York City.

“I want people to know that if you have a dream, don’t stop going after it no matter what life throws at you. You can’t stop. Eventually, you reach that goal," she added.