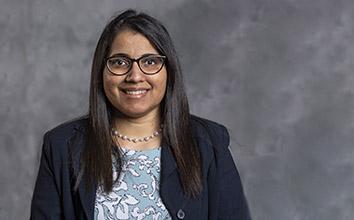 An ASU assistant professor of biology recently traveled to Washington, D.C. to advocate for increased funding for cancer research.

******
Disparities in the incidence and treatment outcomes of cancers are a major health issue in Alabama. Dr. Sabita Saldanha, assistant professor of biological sciences at Alabama State University, is strongly advocating for changes in the laws that affect the community, and has decided to lend her voice and support as a researcher for change.

As a scientist, Saldanha’s research focuses on understanding the mechanisms by which cancer cells retain their ability to proliferate, migrate and form new tumors at distant sites.

“My lab seeks to determine diet-driven epigenetic therapeutic strategies and also determine biomarkers that can be used in the treatment of certain cancers where disparities are observed (breast and colon cancer).”

But for Saldanha, her research wasn’t enough. She wanted to be a bigger voice in the community. She joined the American Cancer Society Cancer Action Network (ACS CAN) as a volunteer and is now one of the organization’s Ambassador Constituent Team (ACT) Leads. As the ACT Lead, her responsibilities include implementing local, state and federal advocacy activities at the congressional or state legislative district level in coordinated efforts with ACS CAN grassroots and government relations staff and volunteers.

“One of my main roles is to also impact public policy alongside ACS CAN and American Cancer Society in the fight against cancer,” she said.

On September 24, Saldanha traveled to Washington D.C. and represented the State of Alabama and its congressional districts at the Lights of Hope, a national leadership summit and advocacy event, in which all 50 states were represented.

Saldanha had the opportunity to meet with staffers of Alabama Senators Richard Shelby and Doug Jones, and Alabama U.S. Representative Martha Roby. She also met with U.S. Representatives Bradley Byrne, Robert Aderholt, Mike Rogers, and had a chance to advocate for the importance of research and the need to increase the funding for cancer research by $2 billion for the National Institutes of Health (NIH).

“I am proud to say that as I returned, I learned that Congress passed a bill for more funding and it was signed by the President,” Saldanha said. “I consider this a small victory, but a lot more has to be done.”

Saldanha said she is looking forward to passing legislation for better cancer screening and prevention procedures, especially for some cancers that are preventable if identified early, such as colorectal and cervical.

“We also strive to improve the care given to patients through the Palliative Care and Hospice Education and Training Act (PCHETA). We are not there yet, but together we CAN.”