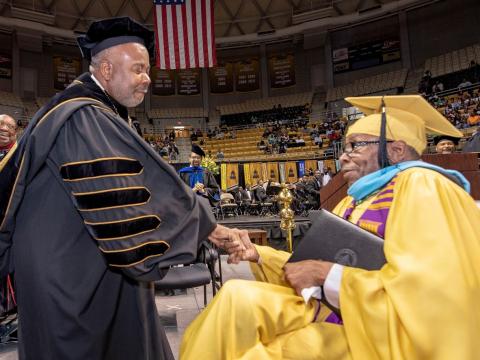 A son and father who share an unwavering devotion to their alma mater, Alabama State University, had a special experience Friday (May 3) during ASU’s 299th morning Commencement Exercise.

There was obvious pride and emotion in the face of ASU President Quinton T. Ross Jr. when he presented his dad, Quinton T. Ross Sr., with the Golden Class diploma on the ASU Dunn-Oliver Acadome stage.

“We’ve always been pretty close as a family, so doing something like this is very special. There are not many people, especially university presidents, that can say they presented their father with a diploma,” President Ross said. “So, I’m pretty grateful for that."

Ross Sr. is a member of ASU’s Golden Class of Alumni (Class of 1969) who received their special diploma at the 9:45 a.m. ceremony, which honors the 50th anniversary of their graduation from Alabama State University. Besides the Class of 1969, hundreds of graduates walked the stage during ASU’s two graduation exercises (9:45 a.m. and 2:45 p.m.).

Ross Sr. said he will cherish the diploma even more now since it was handed to him by his son.

“I can’t believe this is happening,” Ross Sr. said. “To have my son give me my diploma is overwhelming." “My son is the second generation that graduated from ASU and for him to be president now – I’m more than proud of him.”

With thousands of degree candidates, participants and guests in attendance, the commencement ceremony was an unforgettable, grand-scale celebration that appropriately marks the academic achievements of the University's graduates.

Between the morning and evening ceremonies, ASU conferred degrees on nearly 400 students.

“The Class of 2019 is walking in the legacy of so many before them,” President Ross said. “ASU gave you the tools to succeed. So now it’s your turn to keep the ASU legacy and shape our nation’s destiny, as well as your own.”

Of the degrees conferred during the two separate ceremonies, a total of 317 were undergraduate and 70 were graduate degrees.

The colleges participating in the morning ceremonies included the College of Education; College of Liberal Arts and Social Sciences; College of Visual and Performing Arts; University College and the Library and Learning Resource College in the Levi Watkins Learning Center.

An ASU alumnus and one of America’s youngest Chick-fil-A franchise owners, Brandon Hurst, addressed graduates at the 9:45 a.m. ceremony where he gave high praise to his alma mater.

“ASU is the foundation of my subsequent successes in life,” Hurst said. "The University’s high standards and world-class education gave me the resources to prosper.”

Hurst built a successful career at the age of 26.  He was selected to become a Chick-fil-A franchise owner/operator in 2014 and opened his first location in Baltimore, Md., the city’s first ever downtown location.

Hurst told the audience that everything worth having does not always come easy.

“Have resilience and the power to push past any obstacle that may be presented before you and it will take you far.  I want people to realize that they can achieve whatever they put their minds to in life. ASU is a strong tool and a powerful resource to help us accomplish our goals in life," Hurst said.

The afternoon's keynote speaker was State Rep. Lataisha Jackson, an ASU alumna, who was sworn in to the Mississippi State House of Representatives in 2013.

Graduate degrees from the Harold Lloyd Murphy Graduate School were awarded during both convocations in accordance with the graduate degree offerings of each college.