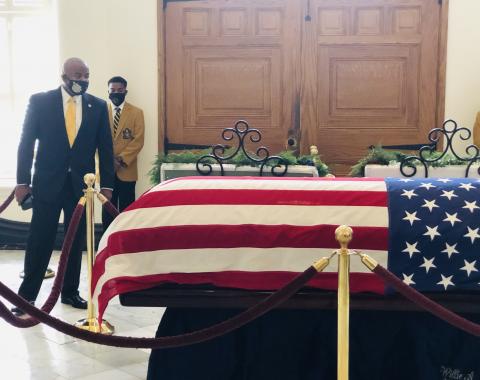 As the nation honored the life and legacy of the late civil rights icon, Congressman John Lewis, Alabama State University’s Golden Ambassadors were invited to be a part of the official party at the ceremony that took place at Alabama’s State Capitol on Sunday, July 26.

Lewis died on July 17 after battling pancreatic cancer. He was 80 years old.

Dressed in their signature gold jackets, the Ambassadors served as the official hosts and hostesses for a private ceremony in the Capitol’s Rotunda and then for a public visitation that lasted for several hours. Their presence was captured by news photographers and seen worldwide, via media outlets.

“The University had received notice four days earlier that Governor Kay Ivey had requested through ASU President Ross that Alabama State’s Golden Ambassadors take part in the ceremony to honor Mr. Lewis at the State Capitol,” said Christen Lane, an ASU senior from Smith Station, Ala., who serves as the chief Golden Ambassador.

“We all felt so blessed personally and proud for our University to be asked by Alabama’s Governor to be a part of the history of honoring a man who was one of the most important leaders in the modern civil rights movement, and whose leadership and courage took place in the 1960’s. He did all of these incredible things when he was just a student at about the same age as we are today,” according to Lane, a secondary education major, with an emphasis in history. 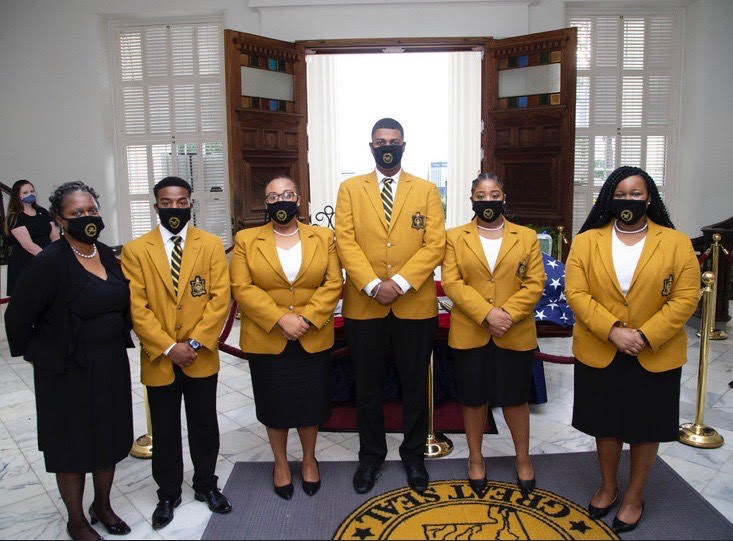 ASU's Golden Ambassadors standing before the remains of the late John Lewis at the Alabama State Capitol with their advisor Jacqueline Powell (photo contributed).

During the event that lasted from 2 p.m. until 7 p.m., two Ambassadors were stationed at the entrance for the official party of government officeholders and officials, while another pair of Ambassadors flanked Lewis’s casket along with uniformed members of the armed forces as the public filed past them to pay their final respects to the man who was described by former President Barack Obama as, “an American whose faith was tested again and again to produce a man of pure joy and unbreakable perseverance.”

Lane stated that among those in attendance before the public was admitted into the Capitol were Governor Ivey, U.S. Senator Doug Jones, Mayor Steven Reed and ASU President Quinton T. Ross, Jr.

“I felt it was a high compliment for the Governor’s Office to ask the Golden Ambassadors from Alabama State University to play a role in the Montgomery ceremony honoring Congressman Lewis, a man who gave so much for the freedoms enjoyed by so many in America today,” Ross said.

“I was extremely proud to see our students standing watch over the late Congressman as hundreds of Alabamians passed through the rotunda to pay their respects. Their presence paid homage to the pivotal role that Alabama State University students, faculty, staff and alumni played in the Civil Rights Movement, a fact that Congressman Lewis highlighted during his many visits to the campus. The Congressman was a great friend of the University; and like the rest of the nation, we celebrate his historic contributions to the betterment of mankind,” Ross emphasized.

Ross said that he has had the honor to meet with the civil rights leader on a number of occasions, particularly when Ross served as an Alabama senator.

“It was my privilege to welcome Congressman Lewis during his stops in Alabama as part of the Faith and Politics tours that he organized and led. We were able to talk about his role in the movement and his many accomplishments since that pivotal time in history. Mr. Lewis had a gentle spirit, but he also was a respected statesman and a passionate advocate for justice,” Ross added.

ASU historian Dr. Howard Robinson said Lewis and the students that he organized in the 1960’s to get in “Good Trouble” included many ASU students, especially during the Selma to Montgomery March.

“Mr. Lewis embodied the better spirit of the nation in the many peaceful protests he helped organize that embodied equality, freedom, justice, voter registration and the many other good qualities, which are taught in America’s history and civic classes today,” Robinson said.

“During the 1965 Selma to Montgomery March, Alabama State became the center for student protest and activism under John Lewis’s leadership as the chairman of the Student Nonviolent Coordinating Committee. It is indeed appropriate that our University’s Golden Ambassadors were present with his body as we bid him farewell at Alabama’s State Capitol, just as our Alabama State students were with him shoulder to shoulder marching for freedom in the 1960’s,” Robinson said.