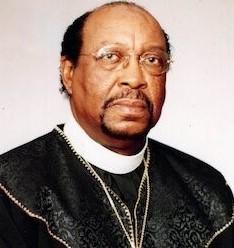 A much beloved and recently deceased Alabama State University alumnus will be featured on the nationally syndicated radio program “Morning Edition” on Friday (June 11). The program is heard coast-to-coast on most National Public Radio (NPR) stations.

Excerpts from a 2010 recording made by the StoryCorps Podcast team of the Rev. Dr. Farrell J. Duncombe will be broadcast. During the segment that was recorded on the ASU campus, Duncombe discusses learning from one’s elders. The interview was conducted by noted ASU archivist Dr. Howard Robinson. The segment will air twice on June 11, at 5:20 a.m. (CST) and at 7:20 a.m. (CST), according to New York City-based StoryCorps producer, Jey Born.

“The hair on the back of my neck literally stood on end after we had booked Rev. Duncombe’s segment on NPR’s ‘Morning Edition’ for June 11. As I ran an Internet search to update his profile, I discovered to my dismay that he had just died and ironically, the program would air the day before his funeral,” Born said.

“Sharing the Reverend’s segment has been on my short-list of items to do for quite a while, but the timing of this booking coinciding with his funeral service seems providential in many instances to me and a way for all of us to collectively pay our respect to a truly great, wise and interesting person, as he is laid to rest.”

ABOUT THE REV. DR. DUNCOMBE

Dr. Duncombe was a dedicated ASU alumnus who earned three graduate degrees from the University, was a member of the Omega Psi Phi Fraternity, Inc. and was once an ASU employee, serving as the coordinator of Alabama State’s Practicum Studies.

He was most well-known as a pastor of the historic Saint Paul African Methodist Episcopal Church (a position also once held by his father) and for his 30-year career in the public education system.

“Dr. Duncombe was a pioneering educator and was a legend during his own lifetime, having served as the first-ever African-American principal of Montgomery’s Sydney Lanier High School and as the much beloved and talented director of bands and administrator at several other local public schools,” said ASU President Dr. Quinton T. Ross, Jr. “Dr. Duncombe carried the banner of ‘O’ Mother Dear’ (Alabama State University) high in the dedication of his life in service to others.”

At the time of his death, Dr. Duncombe was serving as the pastor of the First Congregational First Christian Church.

Born said that the three-minute NPR radio segment featuring Duncombe displays the deep diversity of his upbringing and how he was influenced by his father’s ministry and by a certain Sunday School teacher who became an internationally known iconic figure.

“He shares his words and wisdom during this segment that could have easily gone on to 30-minutes in length if we only had the time allotted to do so. Since that wasn’t possible, we chose to concentrate on his reflection from his childhood on what one may gain in wisdom from their elders; in his case, that of his father who was the senior pastor of Montgomery’s St. Paul African Methodist Episcopal Church and from Rosa Parks, who served as Rev. Duncombe’s Sunday School teacher during his youth,” Born shared.

He added that the radio segment profiles Duncombe’s inner beauty and astute wisdom.

ASU’s Robinson said the interview will allow the public who did not know Duncombe personally to have a glimpse of the richness of his life and legacy.

“This interview is a wonderful tribute to Rev. Duncombe that just happens to coincide with his homecoming service. It is a testament to a man who wove a rich and colorful tapestry of life that spanned so many years and positively impacted so many people,” Robinson said.

StoryCorps is an American non-profit organization whose mission is to record, preserve, and share the stories of Americans from all backgrounds and beliefs. It is frequently heard on NPR. It grew out of Sound Portraits Productions as a project founded in 2003 by radio producer David Isay. It is headquartered in the borough of Brooklyn in New York City.

The Duncombe interview is scheduled to run on NPR's Morning Edition on June 11 at 5:20 and 7:20 a.m. (CST). It may be heard after it airs on NPR's site here, and on StoryCorps’ site here.