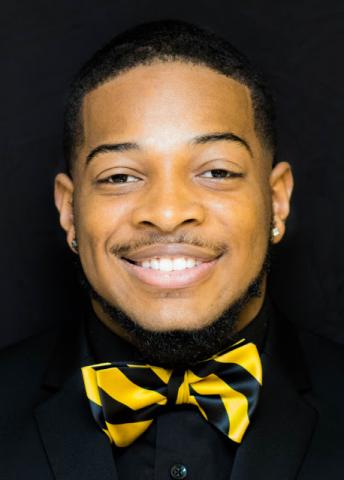 The city of Montgomery's newly sworn in chief executive, Mayor Steven L. Reed, (the city's first African-American mayor elected in its 200-year history) announced on Nov. 22, the members of "Montgomery United," the transition organization that the mayor has created to help him set his pathway to lead the city through his new administration. Among its members is the president of Alabama State University's Student Government Association (SGA).

SGA President and Montgomery native David Whitlow Jr. graduated from Jefferson Davis High School as a dual-sport athlete who excelled in football. Whitlow, a senior studying English and Secondary Education, was a quarterback on the ASU football team before assuming the office of SGA president. As well as serving as SGA president, Whitlow is the marketing coordinator at Aramark, which is the University's food service provider. Whitlow is a proud member of Omega Psi Phi Fraternity Inc.

Whitlow said he is honored to serve on the committee that will help to steer Montgomery's ship of state under its newly sworn in mayor.

"It means a lot to me to be appointed by Mayor Reed," Whitlow said in a telephone interview. "My appointment shows that our new mayor understands that Alabama State University is a vital part of the city from a 'communiversity' standpoint, to its status as a higher education leader statewide, all the way to its important business and financial aspect. And for him to appoint a millennial like me means he understands the importance of hearing the opinions of the city's youth."

Upon his graduation from ASU in the spring of 2020, Whitlow plans to attend graduate school at The University of Alabama (UA) where he will major in mass communications. A goal and a dream come true for him while studying in graduate school at UA would be to serve as a student intern at the University's Athletic Department - he said he is soon to apply. Whitlow's ultimate goal upon graduation from a master's program is to become a professional sports analyst with a major network or entity.

Mayor Reed said that it is important to be led by a dynamic and diverse group of citizens from this committee whom he has selected to review the status of various government agencies, review national best practices and develop local solutions to solve some of the more recalcitrant problems facing Montgomery.

Among others serving with Whitlow on the Mayor's Transition Committee includes committee chairs John Mazyck, principal and owner of The Frazer Lanier Company; and Vanzetta Penn McPherson, retired from her merit appointment as a United States magistrate  judge in which she saw active service in the United States District Court for the Middle District of Alabama.

Also serving are Jake Aronov, chairman and chief executive officer of the Aronov Corporation; Lori David Boone, an attorney and realtor in the River Region; Katie Boyd Britt, who is the president and CEO of the Business Council of Alabama; Dr. Brian C. Gary, MD, FACS, and Jackson Hospital's chief of robotic and minimally invasive surgery; Lance Hunter, CEO of Hodges Warehouse & Logistics; Ashley Jernigan, founder and principal of JDB Hospitality, LLC - a hospitality and public relations firm; Tom Methvin, the managing attorney for the Beasley Allen Law Firm; Boyd Stephens, a community steward instrumental in the I-85 Cyber Corridor Initiative and a leader of Netelysis, a tech-company focused on the Internetworking data analytic space; Dr. Carl A. Stockton, chancellor of Auburn University at Montgomery (AUM), and Dr. Laurie Jean Weil, D.V.M. who has served on numerous boards and founded Camp Sunshine for Girls.