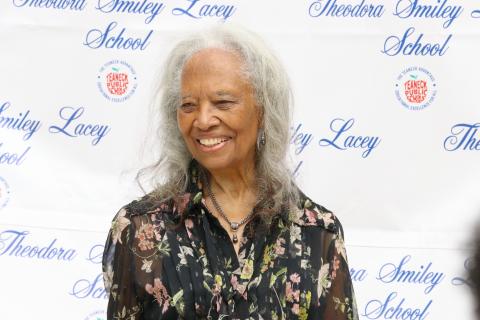 The Theodora Smiley Lacey School, which has about 180 kindergartners enrolled, is the first school building in Teaneck to be named after an African American and a woman.

“I was completely overwhelmed with joy. I was so excited. I could never have imaged that that would happen to me. I was absolutely surprised and so very honored,” Lacey exclaimed.  “The school is a state-of-the-art facility and is the centralized school for kindergartens in the district.”

Born and raised in Alabama, Lacey’s work in civil rights began in her native Montgomery. Lacey not only fought alongside her friend Dr. Martin Luther King Jr. during the Montgomery Bus Boycott, she also fought for voting rights and fair housing.

Lacey, who is 88, explained that her father, a high school principal, was instrumental in recruiting King to become the pastor of Dexter Avenue Baptist Church in Montgomery. She also said that her mother, an educator, and Rosa Parks were lifelong friends from childhood.

“My father was the president of the Board of Trustees at Dexter Avenue Baptist Church. As president of the board, he helped make the decision to bring Dr. King to Montgomery.  Because of my father, I got to know Dr. King; he became a friend of our family,” Lacey said. “And I’ve known Rosa Parks all my life. I would be remiss if I didn’t mention my cousin and civil rights icon Fred Gray. I’ve been so enriched with such great people.”

It was during the boycott that she met her future husband and fellow activist, Dr. Archie L. Lacey, a science professor at Alabama State College, now Alabama State University. The couple’s courtship was brief (six months) when they married in 1956. Lacey said Dr. King baptized two of their four children.  She also said she was a very close friend with Women’s Political Council president and a bus boycott organizer, Jo Ann Robinson, who taught at ASU and was godmother to her daughter Mickey

“I was very active in the boycott, working as a ‘gofer.’ I would type press releases, attend MIA meetings and help raise funds for the boycott. My family and I were deeply involved in the movement,” Lacey said, noting that as a child she was surrounded by individuals who sought to improve conditions for the African-American community.

Lacey said one of the most memorable times during the bus boycott was when she, along with other members of the group, was with Dr. King when he was notified that his house was bombed.

“When he informed us about what happened to his house, we were upset. Dr. King cautioned us to sit down and that we would find out what actually happened, but there would be no retaliation no matter what.  I guess that moment instilled in me the love and the acceptance of nonviolence because of King’s calm and composed manner in the face of danger,” Lacey said.  “He declared the bus boycott would continue despite what happened that night. This was the most memorable night of my life.”

After Lacey and her family relocated to Teaneck in 1961, she successfully helped to push to integrate the public schools in New Jersey, making Teaneck the first district in the country to integrate without a court order.

“Teaneck was a quaint, predominately white protestant town,” Lacey explained. “In the late ‘50s, African Americans started moving into town and then into white neighborhoods. Eventually, all the schools in town were becoming increasingly black. We were not afraid that black children would not learn, because my husband and I attended all-black schools as children, and we knew you can get an education. What we missed was being able to learn how to live in a world with people who were not black. How to truly get along. We knew from history that when schools became predominately black, something happens—teachers would leave, services would diminish and the schools would deteriorate. We didn’t what that to happen to our family. So, we pushed to integrate the schools.”

Before her husband passed away in 1986, the couple founded Teens Talk About Racism, an organization for young people that encourages teens to take action to bring about the positive social change they seek.

The couple also joined the Fair Housing Council of Northern New Jersey, which became instrumental in helping to pass the 1968 Fair Housing Act.

Lacey has won numerous honors for her work as an educator, including Outstanding Women of New Jersey, Most Outstanding Secondary School Teacher by Princeton University and Teacher of the Year from Teaneck School District. She earned the Outstanding Educator Award from the Teaneck Chamber of Commerce and the Teacher Training Institute awarded her the Master Teacher Award.

Like her husband, Lacey graduated with a bachelor’s degree from Alabama State College. She later received her master’s at Hunter College in New York City.

While at ASU, she was crowned Miss Alabama State University 1951-1952, became a member of Beta Pi Alpha Kappa Alpha Sorority, was inducted into the Beta Kappa Mu Honor Society and the Beta Kappa Chi Scientific Society and was on the debate team.  She said ASU helped shape her activism.

“Attending Alabama State certainly was about foundation.  Even though I couldn’t attend what many said was the best educational facilities, I do believe my education was excellent. I had some of the most outstanding teachers that one could ever have. But more than that, I had the nurturing and the expectations to do better. I wouldn’t trade it for anything in the world. Those were exciting and memorable days.”

Lacey also spoke of how to face life’s challenges.

“I tell my children all the time, that it’s not how many times you fall, it’s how many times you get up. Life has a way of letting us all know that we’re not indispensable.  We all are a part of one another and without love and friendship you have nothing. Riches don’t do it, but it’s the path that you take and the people that you meet and the opportunities that you have to serve make your life worthwhile,” Lacey said.

Lacey, who is fondly called the First Lady of Teaneck, said age hasn’t slowed her; she expects to continue her activism wherever she sees inequalities.

“I’ve been so blessed with all of the obstacles that I faced growing up in Montgomery in terms of segregation. I tell everybody that I was born in the most segregated and discriminating state in the country. It was the people and my family that helped to make my journey possible,” she said.

Of all that she has achieved in her lifetime, she places one above them all.

“My and my husband’s greatest achievement in life is our four talented children,” Lacey said. “They are the best thing about me.”