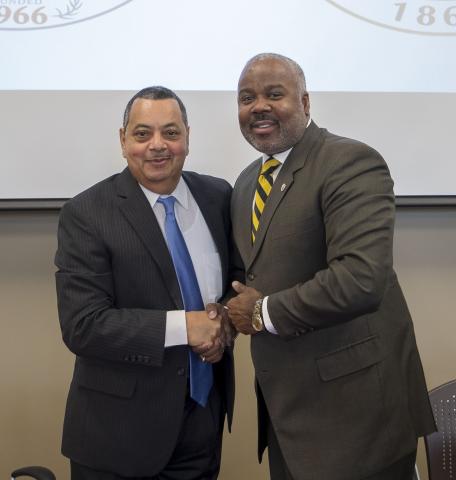 Officials with Alabama State University (ASU) and Wallace State Community College Selma (WSCC) met today (May 1) at 10 a.m. and held a news conference and conducted a signing ceremony to announce and conclude an agreement that provides a pathway for qualified Wallace State Selma students to enroll for study at ASU to achieve a bachelor’s degree.

Both ASU President, Dr. Quinton T. Ross Jr., and WSCC President Dr. James Mitchell, held a news conference and a Memorandum of Understanding (MOU) signing ceremony at Wallace State Selma's Student Center to formalize an agreement that will allow all interested and qualified Wallace State Selma students who meet identified criteria an effortless transfer process to attend and obtain a degree from the four-year university.

"This joint Memorandum of Understanding between Alabama State University and Wallace State Community College Selma gives interested students at Wallace State an opportunity to participate in a seamless enrollment process, which means that qualified students may obtain a four-year degree from ASU," said President Ross.

President Ross said that the MOU allows a student who has started on their two-year degree at Wallace to also have a pathway to obtain their four-year degree at ASU.

"It's all about student success," Ross said. "This is a great partnership between our two schools, which we believe can be a successful example statewide."

"This agreement formalizes a process that many of our Wallace State students believe in, which is getting their degree here in Selma and then obtaining their four-year degree from Alabama State University," Mitchell said.

Ross said that he has worked with Wallace State's president for well over a decade in many capacities and is confident that Mitchell's educational acumen and expertise helps make this a wonderful partnership, which is destined for success for all students who participate.

"President Mitchell is among the very finest Community College presidents in Alabama, which helps assure that his Wallace State's Patriots will be great ASU Hornets," Ross said.

"By signing this agreement, ASU and Wallace State are promoting and providing its students with a great opportunity to achieve far reaching heights in their education and careers,” said Ross. "After all, we are all about helping students."

- This story written by Kenneth Mullinax/ASU.