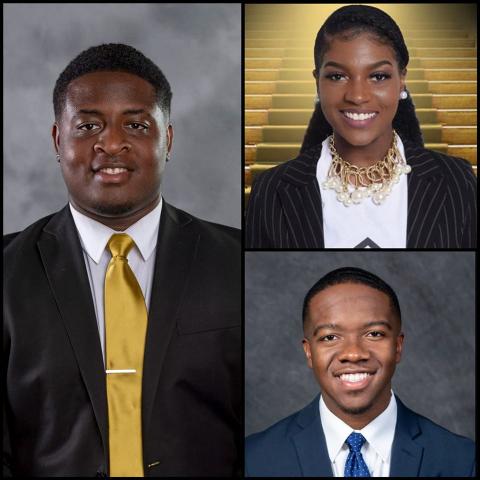 In light of the campus closure due to the Coronavirus pandemic, Alabama State University students “went digital” this week and selected their new student leaders.  The votes were held online April 27-28 with results released April 29 on Instagram.

David Hammond was elected Student Government Association president. He served in two previous SGA administrations on its Executive Board as SGA Secretary.

“I feel accomplished. I set forth the goal of becoming SGA President when I first stepped foot on ASU campus as a freshman.  I’m so grateful and humbled right now to serve in this capacity. I want to thank my ASU family for trusting and voting for me and I want to thank Dr. Ross for reaching out as soon as I won; that shows his commitment to his students,” Hammond said.

The junior communications (radio and TV) major said his administration will hit the floor running to get the new SGA Constitution approved and create a printing station with a computer in the SGA complex for students.

“The work starts now in serving our student body and the University,” Hammond said. “My Administration hopes to enhance student life on campus and be an effective bridge of communication between students and ASU.”

“I’m overwhelmed with joy and positivity. I’m glad the students saw the potential in me and believed in me. I’m ready to start and bring a lot of positive change to the University,” Whitehurst said.

Her list of things to accomplish include her Royal Court initiating service projects for students to do while they are at home and donating items to homeless shelters or nonprofits.

“As my platform says, I’m ready to evaluate the culture,” Whitehurst said.

“I liked that online campaigning challenged us, and it allowed us to be creative,” Whitehurst said.

Davida Haywood, ASU’s vice president of Student Affairs, said although students could not gather on campus, the University wanted the scholars to log on, plug in and engage with one another remotely to have a sense of connection with each other and the campus, especially in times when they may feel disconnected.

“This was the first time that we had an all-digital election but the process went well,” said Haywood. “The University looks forward to the new student leadership doing good work, representing our institution to the highest degree and serving our students to the fullest.”

Haywood stated that given the challenges faced by the nation and world today, the University thanks everyone who has been involved with the 2020-21 election process -- from the stellar candidates to the Election Committee and their hardworking advisers.

“All of them responded quickly to our ‘new normal.’ In the same manner, we want to thank (outgoing SGA President) David Whitlow and his ‘Plugged-In’ administration, as well as (the outgoing Miss ASU) Jhaianne Cooper and her Royal Court, for their diligence and service to the University this past academic year."

The University felt it was important that the student body had a chance to experience the tradition of elections despite not being on campus. Below are the results of their selections.