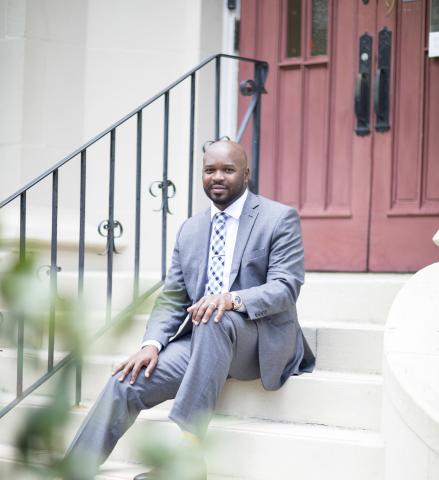 There’s a new entertainment app out and it’s the creation of an Alabama State University graduate and his sibling.

Alumnus  Eugene “Gene” Griffin along with his older brother Cedric founded the entertainment app 24ent, a social media platform designed to give the user control of what they see across 165 categories such as comedy, beauty, fashion, sports, music or inspiration.

“Instead of having one timeline, users essentially have 10. Users who wish to isolate what they see to specific categories can see content specific to the category…We also have common features that users are familiar with such as going live, stories and Aura, which is our version of short video editing,” he said.

Development for 24ent began in 2019 – an idea was becoming reality. Griffin attributes the vision to his brother.

"Knowing there is a gap when it comes to black-owned social media platforms, we wanted to create something special. 24ent allows us to engage with the world while inspiring a generation of dreamers that all things are possible regardless of race or background; we deserve a seat at the table," said Griffin, who oversees the company’s Growth and Engagement.

A dozen coffee-filled nights and 16 months later, 24ent was up and ready to download on both Android and Apple devices from App Store and Play Store.

Griffin explained that once the app has been downloaded, users can create a profile just as they would on other platforms and they're all set.

“Since our launch, we have been in a continuous cycle of process improvement with real-time updates, adding additional features, and being responsive to user feedback,” Griffin said.

Griffin, whose background is in the payments/credit card industry and real estate, said he did a lot of research during the development stages of 24ent. “I knew if it was done right, it would be successful,” said Griffin, who serves as a payments specialist with a New York-based startup.

When Griffin talks about ASU, he can’t help but smile. The connection that he has with the University is the reason he is passionate about giving back to his HBCU. He said his recent monetary gift to the University is a way to show his Hornet Pride.

“24ent is proud to present the University a $10,000 donation, and will be partnering to provide in-game interactions with prizes to increase fan engagement during the remaining home football schedule and home basketball games,” Griffin noted.

The partnership, he explained, involves providing a graphic with a QR code displayed on the ASU Jumbotron during games. Game attendees will take pictures of the QR code which will connect them to a website where they will post pictures or videos under the Sports category showing their fan spirit for a chance to win prizes.

“I wanted to partner with the school to help enhance the fan experience.  Our goal is to continue to create this user experience for the remaining home football games, as well as implement fan engagement opportunities during other sports seasons. We feel this is a unique opportunity to do some great things while giving back,” Griffin added.

The ​​Bogue Chitto,​ Alabama​ native said throughout his career, the lessons he learned at Alabama State University have helped him successfully navigate all the challenges of corporate America.

“Whether it be learning how to properly do a presentation or collaborating with others, the many long nights in the ‘B.A.’ taught me so much about work ethic and getting the job done. When the opportunity to give back to O' Mother Dear presented itself, there was no hesitancy," Griffin said. “I’m proud to be a Hornet!”

The 2004 graduate encourages other alums to give back to O’ Mother Dear.

“ASU is foundational to my career success…I am reaping the benefits of being an ASU alum and in turn, I am giving back what has been given to me. Give, whether it is monetary or volunteering,” said Griffin. “I encourage other Hornets to partner with the University and give back.”