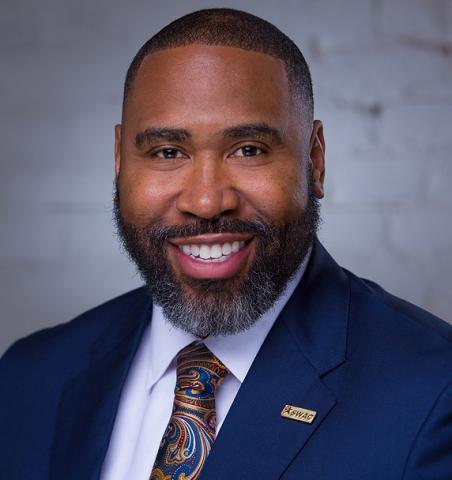 “We empaneled a seven-member search committee to conduct interviews and recommend the top candidate from the field of applicants,” said Ross. “Our search began in June, and the committee was extremely thorough in their approach to vetting the candidates. I would like to thank all of the committee members for their excellent work on behalf of the University.”

Cable has served as the Senior Associate Commissioner for Administration with the Southwestern Athletic Conference (SWAC) since December of 2018. A former student-athlete, Cable earned his bachelor’s degree in political science from Alcorn State University and holds the Ph.D. in Higher Education Administration from Jackson State University.

“I am excited about having Dr. Cable join our leadership team,” Ross said. “He has the experience and his credentials are unquestionable. He embodies the future of ASU athletics.”

Cable said that he looks forward to having the opportunity to lead ASU athletics.

“I am honored and humbled to join President Ross and the Alabama State University family,” Cable said. “ASU has such a rich history and winning tradition founded upon the unwavering pursuit of excellence. I vow a relentless effort to build champions in everything we do. I look forward to working in partnership with our campus and business communities to provide our students, alumni, fans, and the city of Montgomery experiences that unify us and make Hornet Nation proud."

Cable will take the helm of the Division of Intercollegiate Athletics at ASU on August 15.

Dr. Jason Cable has served as Senior Associate Commissioner for Administration at the Southwestern Athletic Conference for nearly three years. In that role, Cable provided vision, leadership, and assistance with regards to all conference matters, including corporate sponsorships, fiscal affairs, personnel, strategic planning, public relations, and general operations. Cable was directly involved in securing and managing a multitude of corporate sponsorships, including NASCAR, Academy Sports, BBVA, Alabama Power, the City of Birmingham and Toyota.

Cable also aided in the creation and execution of the strategic plan for the overall direction of the conference office.  Cable oversaw programming and services associated with academics and NCAA legislation in addition to assisting each conference governance group. He also served as the primary administrator for Football, Men’s Basketball, Baseball, Men’s and Women’s Tennis and the SWAC COVID-19 advisory committee.

Cable has an extensive background in athletics, academics, compliance and athletic program leadership that has provided him with a unique skill set anchored by a proven record of leadership, integrity and efficiency.

After completing his career as a standout student athlete at Alcorn State University, Cable transitioned to employment at his alma mater as the Assistant Men’s Basketball Coach and an instructor of Health/Physical Education. He quickly advanced to athletic administration, serving as Assistant to the Athletic Director before moving to Livingstone College as the Associate Athletic Director for Compliance and CHAMPS Life Skills Coordinator.

Cable has extensive external operations and revenue-generation experience stemming from his time at Alcorn State University where he served on the president’s cabinet.

During his tenure, Cable served as the principal investigator for the successful receipt of the $900,000 NCAA AASP Grant and secured over $2,000,000 in supplemental funding to support athletic programs and support services, while developing corporate partnerships with NASCAR, Allstate, NUCOR, USTA and Wal-Mart.

Under his leadership, the number of student-athletes with a 3.0 cumulative GPA or higher increased by 70, and the department reached an all-time high overall GPA of 3.24. Cable also developed the nation’s first degree program in NCAA Compliance and Academic Progress Reporting.

A strong advocate for the student-athlete experience, Cable developed and secured funding for several new programs to enhance student-athlete development, including the Alcorn State University Student Athlete and Family Enhancement (S.A.F.E.) Center which is an elite academic support, personal development and refueling facility dedicated to serving student–athletes and their families.

Cable is a native of Huntsville, Alabama. He completed his Ph.D. in Higher Education Administration at Jackson State University in the summer of 2019.