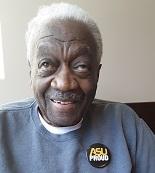 The enduring love of Alabama State University football has seen an ASU alumnus never miss a Hornet home football game for over 50 consecutive years. However, since September he has been in declining health and hopes that he gets a final chance to attend this year's Turkey Day Classic football game on campus.

James C. Whatley (Class of 1969), a self-acknowledged die-hard ASU Hornet football fan, had a continuous half-century record of attending home football games from his residence in Alexander City, Ala., which has only been broken due to the harsh effects of aging.

However, a trip to ASU is in the works for him due to the intercession of an angel - in the guise of a loving nephew - as well as on-going prayers from family and friends. If Whatley is well enough to travel from Alex City's Bill Nichols State Veteran’s Home to ASU's campus on Nov. 28, he will have a true moment of “thanksgiving” as he attends the 2019 Turkey Day Classic (TDC) game.

“My uncle James hadn’t missed a home game at ASU in over 50 years until the effects of being 86 years old coupled with a debilitating case of diabetes has caused him to have a frail body while still possessing a strong mind," said Dr. Rick Nash, a chiropractor with a practice in Lafayette, La.  who has a great love for "Uncle James."

"I hope to help him attend the Turkey Day Classic game this year, which would be a dream come true for him and a tonic for his soul.”

The octogenarian Hornet says that he dreams of attending just one more home football game at “O’ Mother Dear" and nothing could be better than being at the TDC game, which is America's oldest continuous historic black college or university football classic.

Whatley also yearns to visit the campus where he met a fellow ASU student named Betsy Abernathy (Class of 1953) who was a friend of his sister Margie Whatley Nash (Class of 1953) and nephew Rick's mother. Abernathy became James Whatley's loving wife.

She recently passed on.

“I absolutely love Hornet football in so many ways,” Whatley said in a rising baritone voice, which became more animated as he remembered the good times as a student at ASU.

"When on campus, I think of how the University made it possible for me to meet Betsy, the love of my life," said the alumnus.

Both he and his late wife Betsy were education majors at the University – James after serving in the U.S. Army and then attending ASU under the “G.I. Bill of Rights” legislation.  Both became professional educators, with James serving as a third to sixth grade teacher at several schools in the Alex City area with an emphasis in physical education (PE) instruction until his retirement.

The longtime educator said he loved teaching children and he also loves his Hornet Nation football.

“I always enjoyed being in the middle of a crowd at an ASU home game and hearing the fans cheer in either the old stadium, Crampton Bowl, or in the beautiful new stadium that we now have on campus,” he said by telephone.

He likes “that new coach” (Hill-Eley) but said he has a personal favorite.

“Of course, lots of folks admired Coach Rufus Lewis who won all those games in the 1930s for us, and others liked Coach Houston Markham and the conference title he won for ASU in the 1990s. But my personal favorite was Coach Arthur Simmons, who led the team from the late 1950s to early 1960s. That man had courage, smarts, spunk and grit, and did it all with a small staff,” Whatley said.

His constant companion to all of those five decades of ASU home football games that he attended was his best friend, hometown pal and fellow ASU alumnus, Henry Smith. Smith, also now in his late 80s, wasn’t available to be interviewed, yet was present in almost every other sentence spoken by Whatley. It was apparent that he considered him as a brother.

“Henry and I made the drive from Alex City to all of those ASU games because we just love that ball team. Now things have made it difficult for us to do things on our own anymore, but I sure hope that I can make that Turkey Day game this year,” he said with a sigh.

A lady who considers Whatley her surrogate uncle and who speaks to him several times a day is Angela Young, a native of Moss Point, Miss. who brought this story to the attention of the University.

“My Uncle ‘J’ (James Whatley) talks all the time about ASU football to me by phone, and he is an avid Hornet’s fan,” she said. “He knows the stats, and loves everything that is ASU black and gold.” “His body has become weak, but his mind is still sharp as a tack. It is my desire to see him make one more ball game as a kind of bucket-list accomplishment,” Young said.

His loving nephew has also heard of his dream to attend just one more ASU home football game and with the encouragement of Young, has made it a personal quest to see it come to fruition.

“My plan on Thanksgiving is to scoop up my mother (James’ sister) who resides in Mississippi, pick-up Uncle James from the Veteran’s Home in Alex City and drive all them to attend the Turkey Day Classic Game in Montgomery,” Nash said.

“Being back on the Alabama State campus will positively invigorate him. Hearing the roar of the crowd and the marching band playing the ASU fight song will take him back to a great place in his mind...to the days of his youth,” Nash said in an earnest voice.

James Whatley said he will do his best to come back to “his” university, just one more time.

“Making another Turkey Day game would be something to do,” Whatley said loudly.

He then began to recite a verse of the ASU school song, which shares a special meaning with his goal to make another football game on campus a reality despite being in a fragile state of physical health.

“Alabama State, O’ Mother Dear, again we come to thee; our pains and sorrows we forget, when e're thy face we see.”

“I sure do hope to see all y’all this year at the game; God willing. Won’t it be a joyous thing indeed to behold,” Whatley cooed.