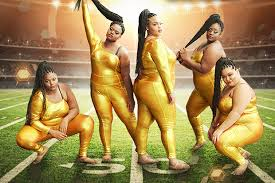 Hollywood reality television actress La La Anthony's production company is featuring the University's talented dance squad with highlights from their 2019-2020 season of performances, according to Dr. James Oliver, ASU's band director and the creator of the Honey Beez.

"With COVID-19 keeping so many in America worried and anxious, Snapchat has produced a true feel-good show that features our Honey Beez in a documentary-style series, which goes much beyond just their performance routines and shows the viewer the private side of the Beez," Oliver said.

Oliver explained that the Honey Beez have been featured on several national media programs, including The Steve Harvey TV Show; America's Got Talent, Bama State Style and Live at The Apollo; but the new series is more in-depth in its portrayal of the popular dance group.

"The new Snapchat series goes beyond what other media outlets have showcased in the past," Oliver stated. "This series is the best Honey Beez feature yet and it shows how much hard work and fun it is to be on the Alabama State University Honey Beez team. Snapchat has captured their courage to get out and perform before tens of thousands of people at a time, to perform well and still be good student-scholars; as well as lead well-rounded lives.”

Hollywood's Anthony has teamed with ITV America's Leftfield Pictures to produce the docuseries for Snapchat. The program follows the Honey Beez and their coach, from auditions to live performances at football games and other venues, while sharing some of the real life highs and lows experienced by the young ladies along the way.

"The Honey Beez are an inspiration, not just among the HBCU dance scene, but to young dancers and performers everywhere," said Anthony in a statement on her new Snapchat series. "Their impact and success are a result of immense determination and talent, all while projecting strength, positivity and love. We can't wait for Snapchat's audience to get to know these amazing young women."

COACH OF BEEZ SAYS SNAPCHAT SERIES IS HILARIOUS AND POIGNANT

The Honey Beez's coach, Anna Marshae Williams, is an integral part of the public and private scenes featured in the docuseries, as well as in the lives of the Honey Beez. Williams said that she is "super-excited" that the viewing public will soon see how determined and committed the Honey Beez are both on and off the field.

"People will absolutely love this Snapchat series because it documents how our ASU Honey Beez are hilarious and entertaining ladies; and it shows their absolute passion for dancing," Williams said. "People will be amazed how our plus-sized girls are just as talented, flexible and regal as any other so-called 'regular' dancers. It also shares the ranges of emotions that are involved in having a team do well and look great."

Williams said in addition to maintaining a rigorous schedule of classes, rehearsals and performances, the Honey Beez also have an outreach program that takes them to high schools where they meet with other plus-sized girls and help them understand that they too, can be anything that they desire to be regardless of their body size or negative stereotyping by their “haters.”

The student-captain of the Honey Beez is Asia Banks, a junior from Birmingham who is a social work major. She said the Snapchat series shows a multi-dimensional side of the Beez, yet to be seen by the public.

"This new Snapchat show means everything to us," Banks said from her home in Birmingham. "Snapchat puts out our story and almost everything we do. It tells our background stories, and goes beyond our routines by showing all that we sacrifice to put on a great show for the Hornet Nation family and other people.”

She said now that other schools are copying ASU's plus-sized dance squad format, it may only be viewed as a compliment for Alabama State University's team.

"ASU has the best plus-sized college dance team in America, and why not, since we came up with the idea and have been doing it the longest. But copy us all you want, the other schools may get some of our routines down, but they will never match our Bama State spirit," Banks said.