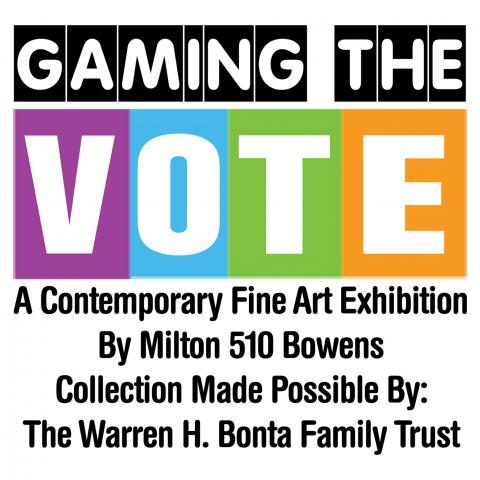 Join the Warren-Britt Art Gallery at Alabama State University on Oct. 12 for a viewing of “

For more than 20 years, Bowens has been creating works using his unique blend of mixed media paintings.

“The nationally recognized artist and activist has raised awareness for important causes and sparked conversations among all sorts of people,” said Cleve Webber, director of the ASU gallery, adding that Bowens’ artist signature is Milton 510.

The exhibit consists of 10 pieces, all mixed media on canvas. The pieces depict classic board games, a metaphor examining the play of politics on voter suppression in the United States. The exhibition comes in parts: The Callie Warren Gallery at ASU is hosting "Gaming The Vote" and The Arthur Britt Gallery at ASU is hosting another eight pieces of mixed media on canvases that depict various aspects of African-American history such as Reparation and Chain Gang.

“‘Gaming The Vote’” is a collection of original mixed media paintings (which) examines the competitive nature of politics, looking at the ratification of the 15th Amendment, the passing of the Voting Rights Act of 1965​ ​and the landmark ruling by the Supreme Court in 2013. I chose to use the most popular board games as metaphors to address the history of the right to vote in America and those who seek to suppress that vote,” Bowens said in an article.

The exhibition is a classic example of the games that are playing out in the upcoming general election, Webber noted.

Born and raised in Oakland, California, Bowens is the fifth son of 10 children and the youngest of the 10​ ​–​ ​the origin of his unique signature Milton 510. Bowens’ artistic promise began at the age of 5 with nothing more than a few pencils and cut-up brown paper bags stapled together and used as sketch paper, his mother’s ingenuity of making the best of lean times.

Bowens never lost sight of his humble roots. Discreetly placed on many of his collage works is a piece or strip of brown paper bag, a subtle reminder it doesn’t take much to spark creativity. Years later, Bowens’ formal art education took off while he attended the Renaissance Art School in Oakland during his junior and senior high school years.

Since 2009, one of his jazz collections, “Afro-Classical,” ​has been ​used as part of course study on the Harlem Renaissance at Cornell University. His work was recently featured in “Transitions Magazine,” which is published by Harvard University.  In 2010, Sacramento Mayor Kevin Johnson appointed Bowens as the Arts and Education Spokesperson for Sacramento’s “Any Given Child” partnership with the John F. Kennedy Center for Performing Arts in Washington, D.C.

He recently formed his Artist and Residence Partnership with Gallery 157 in Moulton, Alabama. Bowens hopes to expose his unique brand of art and artistic insight to the South as he continues to push his philosophy “Art For Education Not Just Decoration.”

Bowens also is committed to giving back to the community and has won numerous awards for his works. He continues to educate through art at several colleges and universities​.​