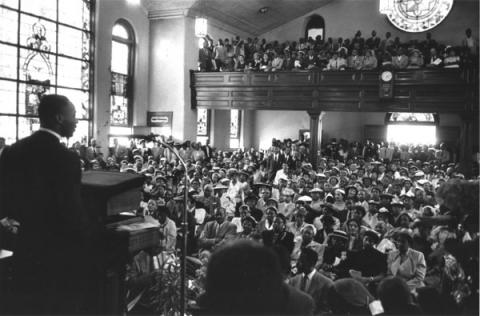 - A virtual celebration conducted by ASU's National Center for the Study of Civil Rights and African-American Culture.

Join ASU’s National Center for the Study of Civil Rights and African-American Culture (National Center) for a virtual event on Monday (Dec. 6), celebrating the 66th anniversary of the Montgomery Bus Boycott's mass church meetings that took place for a little more than a year between 1955 – 1956. These historic “Mass Meetings” were led by Dr. Martin Luther King, Jr., Rev. Ralph David Abernathy (ASU 1950) and others ministers as a means of galvanizing Montgomery's African-American residents in support of the boycott of the city’s segregated bus line.

The event is titled “Let Our Rejoicing Rise - The Montgomery Bus Boycott’s Mass Meetings and the Faith Which Overcame Fear and Violence.” The keynote speaker for the 66th anniversary celebration will be Dr. Marc Morial, president of the National Urban League and former mayor of New Orleans.

The virtual event begins at 6 p.m. on Dec. 6 and will be live-streamed on the National Center’s Facebook and Youtube pages.

University Archivist and National Center steering committee member, Dr. Howard Robinson, explained that this is the third event celebrated this year during the National Center’s observance of the 66th anniversary of the Montgomery Bus Boycott.

"The Boycott’s mass meetings were the bi-weekly gatherings of Montgomery's black residents. They were held in the city’s African-American churches from December 1 1955 - December 20, 1956," Robinson said. "The mass meetings kept the protest alive by providing the information, strategy, and inspiration boycott participants needed in their efforts to overturn an odious, evil and unconstitutional practice, which was running racially segregated buses in the city."

Note: The National Center is under the leadership of  Dr. Janice Franklin, its project director and the dean of the Levi Watkins Library.