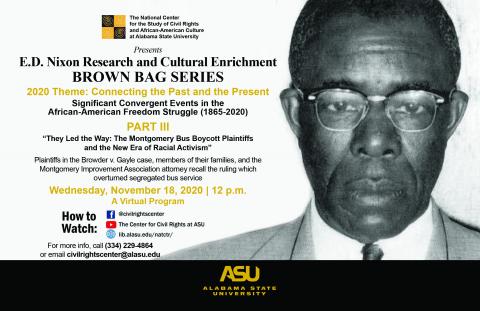 The National Center for the Study of Civil Rights and African-American Culture at Alabama State University presents Part II and Part III of its virtual 2020 E.D. Nixon Research and Cultural Enrichment Brown Bag Series whose theme is “Connecting the Past and Present: Significant Anniversary Dates in African-American History in Montgomery, Alabama (1945- 2020).”  The National Center presented Part I, “The Women’s Political Council,” in February.  All the 2020 series are connected to the theme.

Part II of the series, “Student Activism in the 1965 Voting Rights Crusade,” is at noon on Wednesday, Oct. 28.  Presenters will discuss the role of college and high school students in the 1965 Voting Rights Movement in Montgomery, Alabama, from their points of view as eyewitnesses and participants in the events.  Part II of the series is supported by the Montgomery Interpretive Center for the Selma to Montgomery National Historic Trail.

Part III, “The Montgomery Bus Boycott Plaintiffs and the New Era of Racial Activism,” is scheduled for noon on Wednesday, Nov. 18. Presenters are plaintiffs in the Browder v. Gayle case, members of their families, and the Montgomery Improvement Association attorney who will discuss the ruling that overturned segregated bus service.

The two programs can be watched on Facebook @civilrightscenter, and YouTube at The Center for Civil Rights at ASU.

The E.D. Nixon series is a wide-ranging series of topics dealing with individuals, events or periods in Montgomery’s African-American history that had not received full scrutiny by researchers.