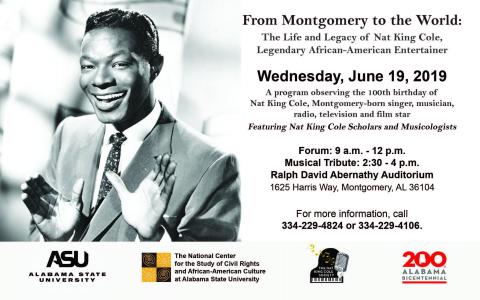 The National Center for the Study of Civil Rights and African-American Culture at Alabama State University will celebrate the 100th birthday of legendary singer Nat King Cole with a special event titled, “From Montgomery to the World: The Life and Legacy of Nat King Cole, Legendary African-American Entertainer.” The program will be held on Wednesday, June 19 from 9 a.m. to 4 p.m., at The Ralph D. Abernathy auditorium. The event will include a forum (9 a.m. to noon) and a musical tribute (2:30 to 4 p.m.).

The program will include scholars and music practitioners who will assess Cole’s personal life and career in the fields of instrumental and vocal music, as well as in the areas of television and film. The program also will examine Cole’s behind-the-scenes support of the civil rights movement.

Cole was born Nathaniel Adams Coles in Montgomery, Alabama on March 17, 1919 to Edward James Coles, Sr., a minister, and Perlina Adams Coles. The family left Montgomery for Chicago when Nat was approximately five years old. Cole would later drop the “s” from his last name, following the lead of an older brother.

The lecture is free and open to the public.

For more information, contact Destiny Williams at The National Center at 334-229-6888.