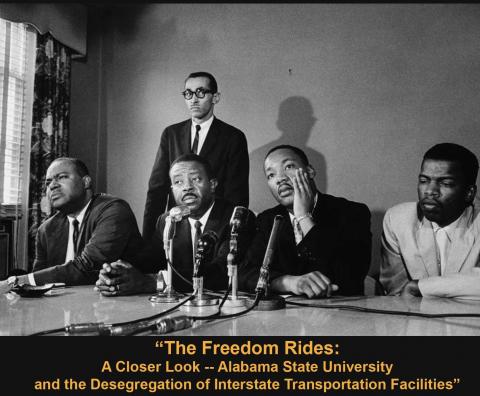 By Hazel Scott/ASU
The National Center for the  Study of Civil Rights and African-American Culture at Alabama State University marked the 60th anniversary of the Freedom Rides with a virtual celebration on May 27.
The speaker was Dr. Ray Arsenalut, author of “Freedom Riders and the Struggle for Racial Justice.”
The program was in honor of the historic 1961 Freedom Riders, African-American and White civil rights activists who rode interstate buses into the segregated South to test the Supreme Court ruling that segregated public buses were unconstitutional.
When the group pulled up to the Greyhound Bus Station in Anniston, Alabama, on Mother’s Day, they were violently attacked, with the activists barely escaping. ASU alumnus, the Rev.  Ralph David Abernathy,  Dr. Martin Luther King Jr. and other civil rights leaders announced the continuation of the rides from ASU’s First Baptist Church, where Abernathy was pastor, following the attack of the riders at the Greyhound terminal.
The Freedom Rides, and the violent reactions they provoked, bolstered the credibility of the American Civil Rights Movement. They called national attention to the disregard for the federal law and the local violence used to enforce segregation in the southern United States.
The interstate travel throughout the Deep South was organized by the Congress of Racial Equality (CORE) and later joined by the Student Nonviolent  Coordinating Committee (SNCC).
The Nation al Center event, titled “The Freedom Rides: A Closer Look-- Alabama State University and the Desegregation of Interstate Transportation Founders,” can be viewed on Facebook, at ASU@CivilRightsCenter, and YouTubePremiere on both the  Center and University’s channels.