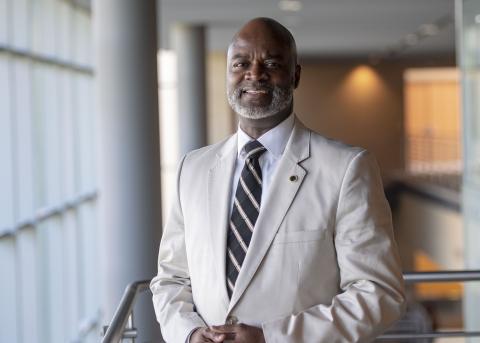 ​The Lyceum Committee at Alabama State University is sponsoring its Professional Lecture Series for ASU students on Oct. 6, 2020, at 11 a.m. CST via Facebook Live, www.facebook.com/asu.
The professional lecture series provides students an opportunity to hear from successful professionals discussing the skills and education needed for success in their chosen fields.
The event speaker is ASU alumnus Larry Mack, deputy director of the Office of Human Capital at the National Aeronautics and Space Administration (NASA) Marshall Space Flight Center in Huntsville; a position he has held since 2015. Mack will discuss "From the Classroom to the Boardroom."
Mack has more than 25 years of experience in human capital, human resources and personnel management with the federal government. Prior to his position at NASA, he held several posts within the U.S. Commodity Futures Trading Commission (CFTC) and the U.S. Office of Personnel Management (OPM) in Washington, D.C.

In recognition of his distinguished career, Mack has received several awards including achievement awards from NASA, as well as the CFTC’s Chairman’s Award for Supervisory Excellence, the OPM Director’s Citation for Exemplary Public Service, the Small Agency Human Resources Council’s Charles A. Bradshaw Award, superior performance awards and several letters of commendation for outstanding service.

Mack earned a Bachelor of Arts degree in Political Science from ASU (1993) and a Master of Arts degree in Human Resources Development from Bowie State University in Bowie, Maryland. His wife Tamara is also an ASU graduate (1994), receiving her Bachelor of Science degree in Elementary Education. His son Zachary is currently a Computer Science major at ASU.  Mack and his family reside in Huntsville, Ala.
--