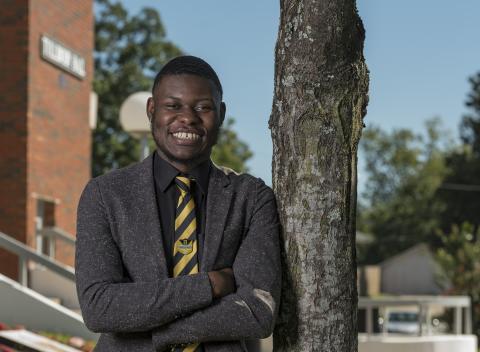 The project was in collaboration with all 105 Historically Black Colleges and Universities to celebrate National HBCU Week 2020. The performance premiered on 105 Voices of History TV on YouTube.

“My experience was amazing. I got a chance to sing one of my favorite pieces, “Lift Every Voice and Sing.”  I love that song; it’s so powerful and it has a strong message. It also has a great history behind it.  I’m grateful and blessed to be part of the ensemble and to perform on a worldwide video,” said Jones, who sings baritone. “I also was recognized by my Music Department, which was such an honor as well.”

Students recorded themselves singing their particular vocal part for "Lift Every Voice and Sing." A panel of choral conductors/voice teachers from around the country listened and watched all the student video recordings.

“We had a video technician who blended all the voices and a conductor. But before that, each vocal part was practiced on Zoom before the actual taping of the song. I videoed my part for the concert in the comfort of my living room,” he said, adding all the students wore shirts with their school’s name in the video. “Each university or college had one student representing their school. It was well organized.”

The Montgomery native said “Lift Every Voice and Sing” was arranged by Roland M. Carter, written by James Weldon Johnson and music by Rosamond Johnson.

“It was perfectly arranged, in my opinion,” Jones said.

Jones pointed out that there is another plus to his new experience: showcasing HBCUs.

“The concert is a way to let others know that HBCUs, such as Alabama State University, play an important role in the African-American community as schools that first gave black students the opportunity to obtain higher education. They still play an integral part of the black higher education experience.  The concert was a way to present the HBCUs power and to show that HBCUs are one family and that we are all together,” Jones emphasized.

Dr. Cordelia E. Anderson, professor of Vocal Studies in the Department of Music in the College of Visual and Performing Arts, said the National Choir Initiative provides the HBCUs a national voice to increase their visibility of their valued talents.

“We are proud of our Singing Hornet for representing our college and the Department of Music,” said Anderson. “His performance was exceptional.”

Jones hopes to use his talents to become a choral director or a high school music teacher.

To watch the video visit https://youtu.be/_2ALD0fktss

About the National Choir

The 105 Voices of History is a Historically Black Colleges & Universities (HBCU) Choir. Its national Initiative was created to promote diversity in America's national venues for the Arts. It provides a national platform to increase the exposure of all HBCUs to diverse audiences and its many constituents, from corporate America to the youngest students, who will be attracted by the Choir's performances to pursue higher education.