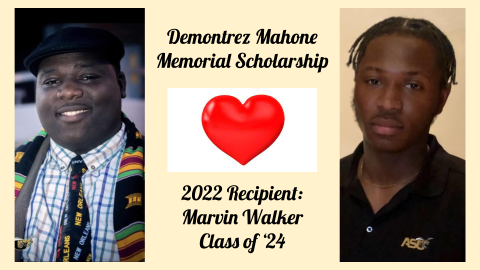 A deserving music major at Alabama State University has become the first recipient of the $500 Demontrez Mahone Memorial Scholarship.

Second-year tuba student Marvin Walker, who has a dual major  (music education and music performance),  shares many of the same admirable attributes and aspirations as Mahone.

“I am incredibly honored to receive this award in Mr. Mahone’s name and I hope I can make him proud,” said Walker, who is the principal tuba of the ASU Wind Ensemble and carries a 3.07 GPA.

Walker noted that the scholarship will help pay for his books.

Shelinda Mahone of Montgomery, Ala., established the scholarship in honor of her son who passed away in May  2020.  She described her son as a  proud graduate of Sidney Lanier High School who, as a high school senior, played in ASU’s High School Honor Band and also took tuba lessons at the institution.  He later received a band and music scholarship from ASU to major in music.

While at ASU,  Mahone’s mother said her son was an academic honor student, represented ASU at the Thurgood Marshall Future Educators Conference, and played in the intercollegiate wind ensemble at the Alabama Music Educators Association Conference.

“He was most beloved by his classmates and the faculty and staff of the music program,” she added. “His aspiration was to become a high school band director.  He was a proud 2018 graduate of Alabama State.”

Dr. Carly Johnson, chair of the Department of  Music, said ASU, the College of Visual and Performing Arts, and the  Department of Music lost one of the University's most beloved alumni with Mahone's passing.

​"One of the most beautiful things about ASU is the feeling of giving back to the community, or paying it forward, so to speak. I know that this scholarship in Demontrez's name will be a great help to Marvin, and in some small way, it will allow all of us at ASU to keep Demontrez's spirit alive in Tullibody Music Hall, which is a place that he dearly loved,"  said Johnson. “We hope to continue awarding this scholarship in Demontrez's name in future years as well.”

Those wishing to donate to the  Demontrez Mahone Memorial Scholarship fund, please contact Dr. Carly Johnson at 334-229-4341 or  cjjohnson@alasu.edu for more info on how to contribute.