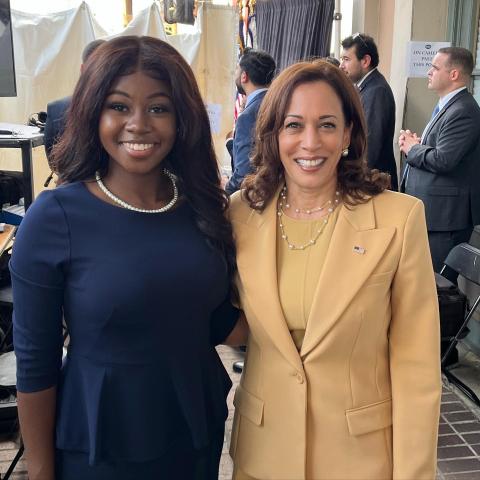 For 21-year-old Kendra Angion, Saturday, March 5, 2022, is a date that she will always remember. On that day, the reigning Miss Alabama State University was seen on live broadcasts across the country as she introduced Vice President Kamala Harris at the 57th commemoration of Bloody Sunday, which was a pivotal moment in America’s history and in the fight for civil and voting rights.

The event held even more significance for Kendra since she grew up “just outside” Selma. Kendra said she had a lot of support from the people of Selma when she was in high school, particularly the “AKA’s”​ ​​​​ ​​​(Alpha Kappa Alpha Sorority, Inc​.) ​​who mentored her. She made special mention of the late Nancy Sewell, daughter of Congresswoman Teri Sewell.

“I’m accustomed to speaking in Selma for various events, but this was the biggest speech I had made there,” said Kendra, who is an ASU graduating senior. “When I got up to speak, I saw my parents and my sister right on the front row. It was amazing!”

Kendra said the opportunity to introduce Vice President Harris came from Freddie Williams, ASU’s assistant vice president for Student Affairs/Enrollment Management and Director of Admissions, who recommended her for the honor.

“When I was contacted by Congresswoman Sewell’s office, I thought about Kendra. She checked every box: She’s Vice President Harris’s sorority sister ​​(Alpha Kappa Alpha Sorority, Inc.)​​; she’s from the Selma area; and of course, she’s Miss Alabama State University, which means she’s a student leader,” said Williams. “Also, I had heard her speak many times, most recently during the ASU President’s Bus Tour. I felt that she would be perfect to introduce the Vice President of the United States and President (Quinton T. Ross, Jr.) agreed. She did not disappoint us or Alabama State at all. I was so proud of her.”

Kendra found out about the opportunity a little more than 24 hours before the Bloody Sunday event. During that brief span of time, she had to complete an application, send her bio and a sample of her speaking skills, and pass a background check.

“I was actually headed to Memphis to represent ASU at the AKA​ ​regional conference when Mr. Williams called me on Friday. I submitted everything and received the first phone call that I might possibly be selected. Then the next call was from a member of the Vice President’s team who needed information for the background check. Again, it was emphasized that it was just a possibility. Then the next morning, I got another call and he officially offered me the opportunity to introduce Vice President Harris. Of course, I said, ‘Yes.’”

That final call led to a flurry of activity for Kendra, including finishing her obligations in Memphis and responding to other phone calls and texts from the Harris team.

On the day of the event, Kendra said she had to wait for quite a while before taking the stage—first in the “hot sun” and then in a tent provided by the Secret Service. She said she was taking a moment to check her appearance when the Vice President and her husband came into the tent, accompanied by members of the Secret Service.

“When they walked over to me, I was introduced to her. She took both of my hands in hers and said, ‘Hello, Soror.’ I replied, and then she asked me questions about myself, about being Miss ASU and about my plans for the future. When I told her that I plan to teach English, she gave me a lot of encouraging words about the need for educators, especially young educators. She also told me to learn more about mental health because students would need that kind of support. We had a great conversation. It seemed to go on forever, but it could only have been a few minutes.”

After meeting with Harris, Kendra said she felt more confident than she had been all day. “I didn’t get nervous until after I finished and sat down.”

Kendra said she has received an outpouring of texts, phone calls and social media comments since Saturday.

“My phone has been really buzzing. I finally posted my appreciation on Instagram because there were just too many calls, texts and posts to answer.”

Kendra was especially thankful for the response from Congresswoman Sewell, who hugged her after the event and said “My mother would be smiling on you now.”

Kendra said she is grateful for what she calls “a once in a lifetime opportunity.”

“If it wasn’t for God and His leading me to Alabama State University, I would have missed a lot. I have had so many great opportunities since coming to ASU, including being Miss Freshman and serving as a Golden Ambassador. Actually, the first time I met Kamala Harris was when I was a Golden Ambassador and she was part of the Faith and Family Tour in 2020, just before we went home because of COVID. But this time was definitely a once-in-a-lifetime opportunity. But I do hope it happens again though,” she concluded with a smile.