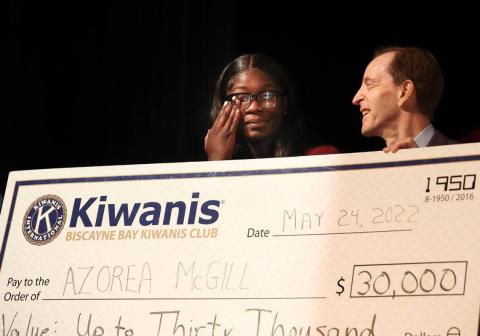 McGill being  presented her $30,000 scholarship check by Attorney Freedman at the BTW awards ceremony (contributed by Biscayne Bay Kiwanis Club).

When Miami, Fla. high school senior Azorea McGill was awarded a $30,000 college scholarship that allowed her to select any school in the nation to attend, she studied what institutions of higher education best met her life-goal and chose Alabama State University. She will arrive on campus in a few weeks as a freshman. McGill, an 18 year-old, attended Miami's Booker T. Washington High School (BTW) and received her scholarship from the Biscayne Bay Kiwanis Club, a respected volunteer organization in South Florida that lends a helping hand to high school students in the Midtown-Miami, Overtown area.

McGill said that it is "a dream come true" to attend Alabama State University and the scholarship she was awarded by the Biscayne Bay Kiwanis, coupled with other monies and grants she has won, will take care of almost all of her major university expenses over the next four-years.

"It is a phenomenal opportunity for me to have such an amount of scholarship money made available to me since I come from a single-parent home. In going to college, I wanted to be able to help my mother, who works as a security guard, make ends meet, and now my dream has come true," McGill said by phone from Miami. "I have been working after school to save up money for college and to bring money home and now, my choices have expanded with the Kiwanis' scholarship...so I chose Alabama State University on the strength of its Forensic Science program, which is what I want to do as a career. I am very good at STEM subjects and ASU has demonstrated to me that it has strengths in that area of study."

McGill, who has more than 465 community service hours to her credit with volunteerism and after-school jobs, also has a 3.6 GPA, and serves as president of her senior class.

Sharletta Rawls-Smith is McGill's guidance counselor at BTW and serves as the school's Key Club sponsor. The Key Club is part of the Biscayne Bay Kiwanis Club.

"Azorea is a scholar, a class leader, and a diligent after-school worker who has overcome many of life's challenges and heartaches, yet never let them cause her to be anything but a winner. She will be whatever in life she sets her mind to be because she is that strong and that gifted," Rawls-Smith energetically stated. "When her brother was murdered in an Overtown shooting, most people's life would have been severely altered by it. Yet it energized our girl to work even harder and excel at her studies and lending support to her mother.”

McGill's counselor said she not only did well in school, but also focused on making good grades and threw herself into extracurricular activities, including serving in student government, working as a volunteer in a local nonprofit that uses sports to help at-risk young people and even teaching elementary school students about STEM subjects; including robotics.

"Not only does she do well in school, but afterwards, she worked a 6 p.m. to 2 a.m. weekend-shift at a Miami soul food shack. so she could afford a MacBook PC while also helping her mom make ends meet, since she didn't have a father at home," Rawls-Smith said.

RECEIVES THE SCHOLARSHIP AND PREPARES FOR ASU

McGill received her scholarship at BTW's Student Awards Ceremony in a surprise announcement in front of a crowd of more than 300 who were dressed in formal attire, stated local attorney Rick Freedman, the past president of the Biscayne Kiwanis Club and its scholarship chairman who surprised McGill with an oversized $30,000 check.

"When she won, she broke into tears of joy, and shouted to her mother 'We did it, Mom,' which touched all of our hearts," said Freedman. "She possesses everything we look for in a winner of our award - scholarship, character, a strong work ethic, volunteerism and a generous spirit."

NOW ON TO STUDY AT ALABAMA STATE

"I am both excited and nervous to be moving on to the next stage in my life, which is attending Alabama State," McGill said in a whisper of a voice. "It is a big step for me that will be new and different. Thank goodness it is close enough to home for me to see my mom. Yet I am very excited to become a STEM student and scholar and make something of myself in life, which will make my mother proud."