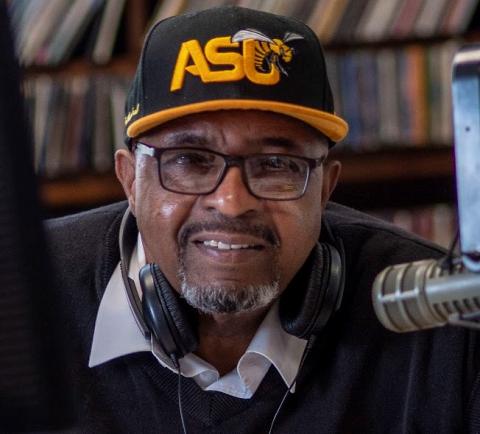 “The Mel Marshall Morning Show (3MS)” was a popular program on WVAS for more than 30 years. His loyal fans were drawn to his distinctive voice and music selections.

A native of Shorter, Ala., Marshall was a graduate of Tuskegee University and an Army veteran. His radio career began in 1974. In the early days of his career, he worked as a full-time announcer and assistant program director at such stations as WQIM-FM in Prattville and WBIL-AM in Tuskegee.

In 1977, Marshall was contacted by his friend, Ronald LaPread to handle promotions for a new R&B group, The Commodores. Marshall toured with the group during their hey-day, but his passion for radio never waned.

In 1983, Marshall was given a dream-come-true opportunity to help to launch WVAS-FM, the jazz-oriented public radio station located on the campus of Alabama State University. Over the years, Marshall held a number of positions at the station, including a long stint as program director; but he will be best remembered for his raspy voice, incomparable humor and song selections ranging from blues to R&B as he served as the “wake up call” for thousands of listeners each day.

“This is an immeasurable loss to WVAS, to our community, and to his listeners around the globe,” said Station Manager Candy Capel. “Our WVAS family will cherish every moment of music and laughter that we shared with our beloved Mel Marshall.”

In addition to his radio shows, Marshall was known for being the halftime show announcer for ASU’s Mighty Marching Hornets, a “gig” that he proudly held for 28 years.

For his many professional accomplishments, Marshall was inducted into the Alabama Broadcaster’s Association Hall of Fame in 2013. He was only the third African-American to be so honored in Alabama.

“Mel Marshall was a broadcasting legend in this area,” said ASU President, Dr. Quinton T. Ross, Jr. “I recall listening to Mel during my college years at ASU, and there really was no other voice like his. We are grateful for his contributions to the industry and for his work with ASU’s student interns over the years. His voice and his radio presence will be greatly missed.”
News media contact: Kenneth Mullinax: 334-229-4104.
###ASU###