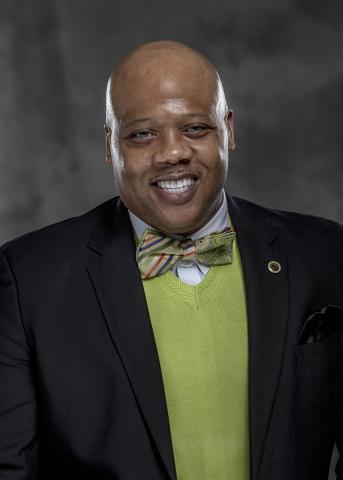 “This honor is bestowed to only 8 people in the nation; I am not surprised that Mr. Martin is among the elite. We are so proud of his work and his commitment to our students,” said Dr. Wendy R. Coleman, dean of ASU’s College of Visual and Performing Arts.

Each year, the eight KCACTF regions honor individuals or organizations who have made extraordinary contributions to the teaching and producing of theatre and who have significantly dedicated their time, artistry and enthusiasm to the development of the KCACTF. Most importantly, recipients have demonstrated a strong commitment to the values and goals of KCACTF and to excellence in educational theatre. It is the most prestigious regional award given by KCACTF and is considered one of the great honors in theatre education.

“I had the honor of nominating him. Brian has been a consistent presence at KCACTF and his guidance has brought Alabama State to an impressive record of finalists and award winners. We have seen him working with his students at the festival every year. In addition, under his guidance and that of other faculty Alabama State has brought students to the devised program, dramaturgy, and Journalism and advocacy. All of these factors reflect the commitment that Mr. Martin has made in supporting the mission of KCACTF,” said Lisa L. Abbott, Region IV Chair.

Former ASU professor and current Interim Chair of the Visual and Performing Arts Department at North Carolina A & T University, Mr. Gregory Horton made the presentation during the ceremony. His remarks were heartwarming and reflective of Martin’s expansive career.

“It is quite befitting that I get the chance to tell you about my previous student, mentee and friend Brian K. Martin. He and I go back as far as the early nineties. This is a special time and presentation. Mr. Martin, affectionately referred to as Biscuit by his peers and friends is, and has been a force to be reckon with,” Horton said. “He is an awarding winning director and acting coach, four times consecutively in our region and moving on to nationals.”

Horton said that this was not his first time winning regionally at KCACTF. Martin’s first win was in 1992-93 when he led the cast of Jesus Christ Superstar, playing the role of Jesus.

“Even then Mr. Martin was a leader and proved to be at the top of his game. Though it was the first time Alabama State University had participated in a number of years it was the beginning of a love story between Brian and KCACTF Region IV,” Horton said.

Martin graduated from ASU and received his MFA at the University of Louisville. After completion of both degrees he answered the call of Dr. Tommie Tonea Stewart, first acting teacher/mentor to return to ASU and begin his teaching career as a college professor. His love for teaching and success has never wavered. Empowering students to be beyond the best they can be has been his mantra in his more than 25 years as an educator, director, and acting coach and now Chair of ASU’s Department of Theatre.

“Brian has worked nationally and internationally bring vast attention to Alabama and the city of Montgomery. Creating winners, directing new scripts, creating diversity in the African American theatre cannon. While raising a beautiful daughter and giving back to his family and community,” Horton said. “It takes a special person to complete such massive accomplishments before the age of 50. I am proud to present to you at this 53rd KCACTF Region IV, my previous student, mentee, friend, and Medallion Award Winner-Mr. Brian Kenneth Martin.”