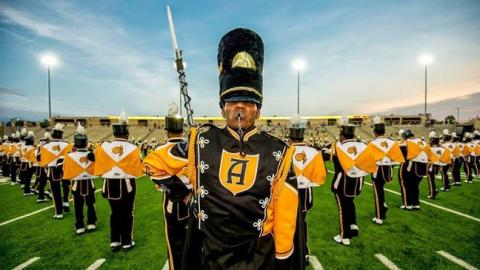 The nationally acclaimed band will perform during halftime of the Atlanta Falcons vs. Carolina Panthers game on Sunday, Oct. 31, in Mercedes-Benz Stadium in Atlanta, Ga. Kickoff is scheduled for 1 p.m. EST. The game will air on FOX.

“It can’t get any better than to have this opportunity because they just don’t invite anybody; they invite the best. We are amongst those that are the best. We are happy and honored to be back there again,” Oliver emphasized.

Oliver noted that the marching band first played at the Falcons’ game against the Los Angeles Rams in 2019.

“We are looking forward to bringing the house down as we did in 2019 where the crowd gave us a standing ovation….For weeks after that, there was a continuous buzz on different social media platforms about that performance,” Oliver said.

Dressed in their black and gold uniforms, band members will provide an unforgettable six-minute halftime show, titled “Soul Train,” that's packed with R&B sounds that will have the crowd swaying to the music.

“We are coming to put on a great show,” Oliver said.

Oliver noted performing before 65,000 to 70,000 people at the Magic City Classic in Birmingham on Saturday  (Oct. 30) will help any band member who’s a  little jittery about being on a world stage.

The Mighty Marching Hornets band, under Oliver’s direction, has won countless awards, was the first HBCU marching band to lead the Rose Bowl Parade, and has appeared in numerous national television shows and movies, including the documentary Bama State Style and Beyonce’s  2019 special Homecoming, and at iconic national events.

Dr. Wendy Coleman, dean of the College of Visual and Performing Arts, said that having the band perform during this weekend’s NFL game is yet another giant step forward for the University and its students.

“For our students to have this type of exposure where millions of people all over the world will watch this football game…It’s an amazing opportunity and we are so excited,” Coleman said. “We know, like they’ve done all season, that they will represent us (ASU) well.

Oliver echoed Coleman. “It’s a great honor to have Alabama State University being represented by the Mighty Marching Hornets at this professional game in Atlanta.  We have a great group of students who thrive to be good musicians and band members. That’s what makes our band -- students that are really good,” Oliver added.