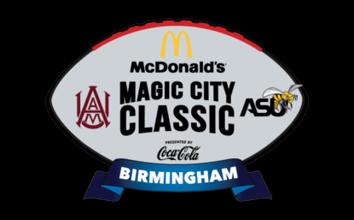 *****
Members of Alabama State University's Hornet Nation and the general public may now watch Saturday's McDonald's Magic City Classic Parade's bands, dance teams and floats live in downtown Birmingham without leaving the comfort of their homes by turning on their televisions to either Birmingham's WBRC FOX 6 or Montgomery's WSFA 12. Other television stations in the Raycom Network broadcasting it live Saturday include WAFF in Huntsville, and WDFX in Dothan.

All of the Raycom TV stations will be broadcasting the parade live in its entirety on Saturday from 8 to 10 a.m.

Saturday's parade is just the opening act that occurs that day before the gridiron battle between Alabama State University and Alabama A&M at Birmingham's Legion Field.

The kickoff of the Magic City Classic is set for 2:30 p.m.

For more information on the Classic weekend, visit https://magiccityclassic.com/