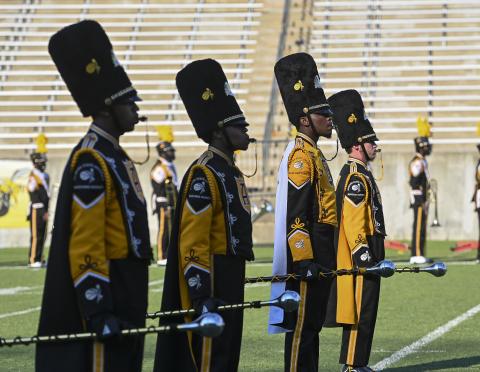 All of the ASU recipients were surprised and excited when they were informed about the scholarships.

“I’m very appreciative. It came at the right time; I was needing a little help for my school balance,” said Price, who has been head drum major since 2020.

“I was totally taken off guard. I didn’t expect what the drum majors did actually had that much of an impact on the community and people in the world. I didn’t know there were actually people that cared that much about the stuff we did and watched what we did to the extent that they thought we deserved a scholarship,” Heideman said.

As head drum major, Price is the leader of the marching band during rehearsals and performances. He carries out the instructions of the band director and other instructional staff regarding what needs to be done with the band.  He is second in command next to the band director.

“If the band director is not there, I’m in charge of everything that goes on.  My job is actually a field commander. When we do halftime shows I make sure the band is on one accord. I help unify the band on and off the field,” Price said.

“We are an extension of the band director. Any directions the band director gives us,  we relate it to the band. We help keep things running smoothly during practice and performances,” said Heideman. "When we have our own time, we  work  as a Drum Major Squad and work tirelessly to perfect whatever we are working on.”

The Foundation officials said the nonprofit is focused on band members, especially drum majors, who make a  significant commitment of their time to represent their University. The scholarships, they noted, are a way to alleviate some potential stress.

Nikki Porter, president of the Foundation, said while the 2021 J. McCall Foundation scholarship went to Alabama State University band members, the goal is to expand to other HBCU bands in subsequent years.

“Our … scholarship disbursement is a starting point. We want to expand to other communities while maintaining a presence at ASU. We also hope to collaborate with other entities with similar goals to make a greater impact even faster,”  said Porter.

The Foundation's goal is to share interests similar to McCall’s, including fishing, kayaking and landscaping.

The  J. McCall Foundation was created by some of McCall’s family members and friends who wanted to continue McCall’s legacy of helping others.