Kids Overcoming Disabilities Produce a Theatre Performance that is Poignant! 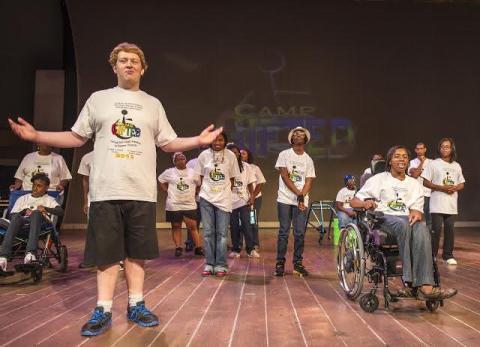 A very special event takes place once a year that sometimes leaves a tear in the eye of even the most cynical among us, which is called Alabama State University's  Camp G.I.F.T.E.D.

On July 12, at noon, the inspiring 'live' theatre performance of over 20 gifted kids with various disabilities will be performed on the ASU campus as each graduate from what is the state of Alabama's first-ever theatre summer camp founded for young people with disabilities. The event and staged play is free and open to the public.

This year's performance at ASU's Leila Barlow Theatre is the culmination of a very special week-long summer camp founded by ASU's Dr. Tommie "Tonea" Stewart who recently retired, and is considered by many as the most famous dean of ASU's College of Visual & Performing Arts in its history.

"The camp's purpose is to empower young people with disabilities who are often stereotyped and wrongfully overlooked in the arts," said Dr. Stewart.

Stewart added "All week long the camp's attendees have worked to create a stage-play that enables all of them to display the theatre crafts that each has honed into an inspiring story." "It displays each of them overcoming individual disabilities and acting, singing, dancing, working backstage and participating in unique forms of artistic expression, which in many cases is the first-time in their lives that they have been able to do so," Stewart commented.

Camp G.I.F.T.E.D. (Giving Individuals Freedom to Express Diversity) is sponsored by the Tonea Stewart Summer Performing Arts Camps at ASU and it is for people with disabilities, ages 13-21.

"I hope everyone will join us for the Noon performance on July 12, and show their support and encouragement to these most gifted young people," Stewart said.