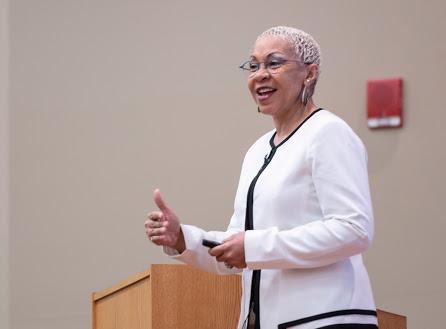 As the signature event of Black History Month, the convocation observed the 55th anniversary of the Selma to Montgomery Voting Rights March and the opening of the civil rights Montgomery Interpretive Center at Alabama State University.

Members of the University’s community took advantage of the opportunity to hear from DeGruy, a gifted and sought after public speaker. More than a hundred students, faculty and staff packed the Abernathy Auditorium.

“I’m very excited to be here today, celebrating Black History Month with the students of The Alabama State University, to share with them some of my experiences as we reflect on the legacy and leadership or our ancestors,” said DeGruy, who is president and chief executive officer of Joy DeGruy Publications Inc.

“People do better, when they know better,” said DeGruy.

In her upacking of the truth, she addressed the lack of knowledge about the Statue of Liberty.

She told a story about visiting Lady Liberty and uncovering the truth of the origins of the monument.

“The original model for the statute had her holding broken chains in her left hand and at her feet. I know this to be true because I saw the original renderings.”

DeGruy said when the French gifted the statute to the United States it was to be a reminder of liberty, with specific focus given to slavery. But American backers (who likely earned their fortunes through slavery) decided not to fund the statute. So the artist removed the broken chains in her left hand and replaced it with a book; the chains remained at her feet.

Today, DeGruy said, visitors to Lady Liberty may find it difficult to see the chains at her feet because they are mostly obscured by the pedestal.

She remarked that most black people don’t connect with Lady Liberty because they don’t know the history behind it.

“How much taller would young black people stand if they knew that those chains represented their ancestors who gave their lives for them. How much prouder would they be,” DeGruy said.

Because of DeGruy persistent, the Park Service now includes this part of the story in their interpretation to visitors and on their website.

“I never want us to sit back and be quiet,” DeGruy said.

DeGruy told the audience that what she is finding in 2020 is there are many African-American students and students of African descent who don’t know their history, including students at historically black institutions.

“That was troubling to me,” DeGruy said. “If we want to understand the state of what’s happening in the world today, we need to know our past – particularly the painful parts.”

She encouraged the young people in the audience to start on the road of understanding their history.

“We must know our shared history of slavery and its ongoing impacts if we are to stop the cycle of generational trauma that stems from it,” DeGruy said.

DeGruy ended her talk on an optimistic tone.

“We can learn how to recover, move forward and heal,” she said.

DeGruy’s research focuses on the intersection of racism, trauma, violence and American slavery. She has more than 30 years of experience as a professional in the field of social work. She conducts workshops and trainings in the areas of inter-generational/historical trauma, mental health, social justice, improvement strategies and evidence-based model development.  She has also developed an assessment scale for measuring respect with regard to African-American male youth.