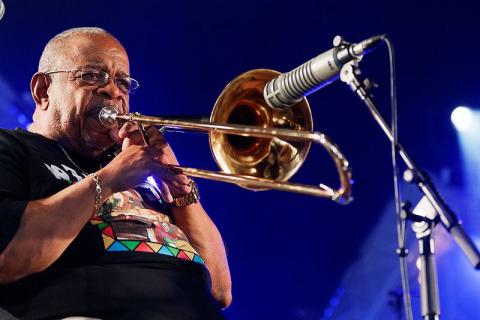 Fred Wesley, a jazz trombonist and ASU alum, whose world renowned musical funk with the likes of James Brown and Ray Charles has captured the attention of jazz enthusiasts from around the world, AND now, he is the focus of a filmmaker’s new documentary, “Never Just a Sideman.”

A film crew from Switzerland was on the ASU campus on Jan. 27, to document Welsley’s (aka “Funky Fred,”) journey from ASU music student to one of America’s greatest jazz funk trombonists.

“This documentary is trying to shine the light on sidemen who helped stars become stars,” said Maximilian Speidel, film director, whose company is based in Zuriack, Switzerland.

A sideman refers to a musician that accompanies a major artist who relies on his skills to make his performance successful.

Along with Wesley, other Funkateers included in the documentary are George Clinton, Bootsy Collins, drummer Bernard “Pretty” Purdie and Gary “Mudbone” Cooper.

“This project started out last year in a small studio in Lichtenstein,” Speidel said. ”We actually flew in all the musicians (to the studio).”

“I hope viewers’ takeaway from the documentary is the need to be aware that if you want to achieve something, we need the people around us,” Speidel said. “It’s not about yourself, it’s always about the team. So I think it’s really important that people look around and be aware of who is with me and who helped me achieve what I have achieved.”

WESLEY'S BACKGROUND IS A MUSICAL WHO'S-WHO OF FUNK
Wesley was the band director for musics legendary soul king, James Brown starting in the 1960's and continuing through the ‘70s. He was one of the architects of funk who donated his famous black trombone to ASU. He recorded several songs with James Brown, including “Say It Loud – I’m Black and I’m Proud,” and he co-wrote the hit song, “Hot Pants.” He also recorded with Count Basie, toured with Ike and Tina Turner and performed with Ray Charles, Lionel Hampton, Van Morrison and De La Soul.

WHILE at ASU
The ASU-schooled musical maestro of funk played in the stage band when he attended the University in 1961. “I think what is so special about Fred is that you could put him in any genre and he would arrange you the best mixer,” Speidel noted.

The documentary is scheduled for released in 2021.