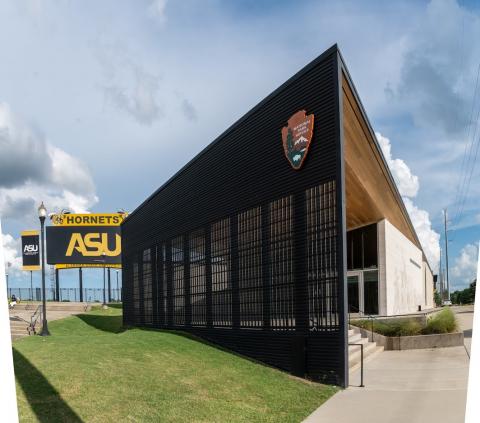 The Selma to Montgomery National Historic Trail will reopen the Montgomery Interpretive Center (MIC) located on the campus of Alabama State University starting on Friday, May 28, with a reduced number of visitors being allowed inside it at one time. Its new hours of operation, as announced by the National Park Service (NPS) that oversees its day-to-day operation, will be each week on Fridays and Saturdays, from 9 a.m. to 4:30 p.m.
The center will open in accordance with the University’s protocols regarding health and safety.

“While we are excited about the opportunity for visitors to be able to benefit from the historical displays and information housed in the Interpretive Center, we are committed to maintaining a healthy campus,” said ASU President Dr. Quinton T. Ross, Jr. “I want to emphasize that ASU is still a mask-mandatory campus and all visitors, employees and students are required to wear masks in public spaces. Visitors should also follow CDC guidelines regarding social distancing while inside the Center and on our campus at ASU."

ABOUT THE NPS MONTGOMERY INTERPRETIVE CENTER LOCATED AT ASU

The $5 million NPS Interpretive Center for Montgomery, located on ASU’s campus, honors the 1965 Selma to Montgomery March and the heroes, martyrs and foot-soldiers who made voting rights history happen. Center exhibits tell the story of the voting rights march led by Dr. Martin Luther King, Jr., John Lewis and F.D. Reese with a focus on the roles of the residents of the city of Montgomery and ASU when the march reached Alabama's capital city on March 25, 1965. It is the third and final center on the National Historic Trail, established by Congress in 1996, which additionally includes the Selma and Lowndes County Interpretive Centers.

The Montgomery Interpretive Center is located in front of The ASU Stadium, which is a short walk from the one-time home of civil rights leader Ralph David Abernathy and from the church parsonage that housed Dr. King and his family.

King and tens of thousands of men and women marched from Selma to Montgomery in 1965 to champion voting rights for Alabama and the nation's African-American citizens. The March also served to remind the nation of the murder of Jimmy Lee Jackson in Marion, Alabama in Feb. 1965 at the hands of Alabama State Trooper James B. Fowler; whose death served as the catalyst for the March and ultimately the enactment by the U. S. Congress of the Voting Rights Act of 1965.